Gustafson Was In His Element Among The Rocks 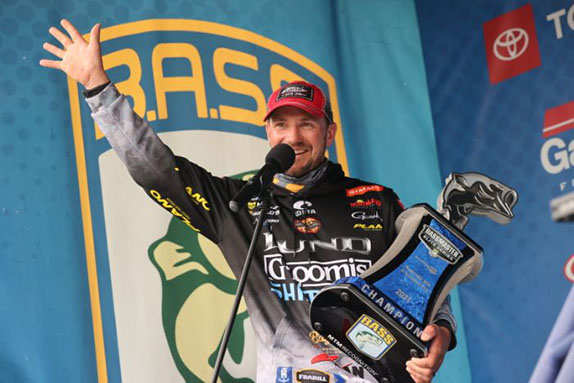 Jeff Gustafson got his first tour-level victory in his 9th year of fishing as a pro.

Jeff Gustafson was more than 1,300 miles from his residence last week while he was competing in the Tennessee River Bassmaster Elite Series. The way the smallmouth bass cooperated with him, though, the affable Canadian might as well have been right at home.

Gustafson notched his first tour-level victory in his 9th season of fishing professionally as he led from start to finish. He did what many experts had long thought was next to impossible – win a multi-day tournament on a Southern body of water while weighing nothing but bronzebacks, particularly one with an 18-inch minimum-length requirement for brown fish.

"It feels pretty good, but I was glad when it was over," he said Monday afternoon while making the long journey home to Keewatin, Ontario. "It was fun, but I wanted to get 'er done.

"I've fished a lot of tournaments and I've been close (to winning) a few times. Going into the first day I was just hoping to catch a smallmouth or two – I didn't know what was there or what the potential was. I had a great first day, then I headed out on the second day to find out whether I just got lucky or what. After I caught them again that day, I really dialed in and I realized that I had a shot to win."

Stayed Between the Big Bodies

The place where Gustafson compiled his bags was the canal that separates Tellico Lake from Fort Loudoun Reservoir. There's a large boat ramp nearby that he and many other competitors utilized on practice days.

The canal had a fair amount of current running through it and he used his Humminbird Side Imaging to identify some good-looking rocks in the 18- to 20-foot depth range, along with schools of baitfish.

"It had some of the right ingredients that gave it a lot of potential," he said. "I really got lucky that I found it and no one else did.

The manner in which he caught his fish was one that he's extremely familiar with. It consists of drifting along with the current while fishing vertically with a shad-imitating soft-plastic on a weighty jighead. 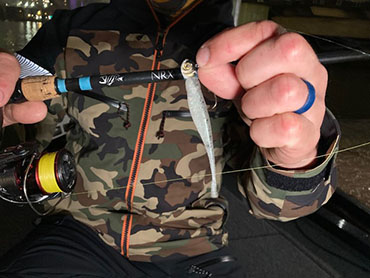 
A Z-Man Jerk ShadZ on a 3/8-ounce jighead produced all of Gustafson's fish at the Tennessee River Bassmaster Elite Series.

He said he learned the technique from pioneer northern anglers Ron and Jim Lindner. At Rainy Lake near his home, it's a staple for catching bass and walleye from mid-summer through the fall.

"The key is you want to have a heavy jig and it's critical that you watch your bait on 2D sonar under the trolling motor," he said. "The bass are laying behind the rocks, out of the current. You keep your bait a foot or two off the bottom and let it go over the high spots and drop down into the holes. Some of the fish will just come up and smoke it and some are a little hesitant, so you shake it or lift it and sort of play keep-away to get them to bite. I was catching 20 or 30 fish every day and there were maybe one or two a day that I didn't see on the screen before they bit.

"I feel so lucky and blessed to have stumbled into that program. I've caught thousands of bass and walleyes doing that so it's something I'm comfortable with and I had a lot of confidence."

By the weekend, he'd narrowed his approach to focusing on a specific type of rock cluster. It was a challenge to make the proper drift on windy day 4.

"Sometimes it took me two or three times to figure out how to line up at the start," he said. "If I missed it by a few feet, I wouldn't catch anything."

He said released the equivalent of a 13-pound bag each day of fish that were just shy of the minimum length.

"Some of the fish I threw back were heavier than some I actually weighed in. A lot of those 18-inchers were skinny."

> The jigheads are made by a friend of his in Ontario. He'd have preferred a half-ounce version, but didn't have any with a small enough hook. 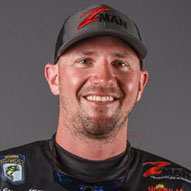