BACK
Sluggish Bite On Day 3

Birge Wins First Knockout Round With 25-14 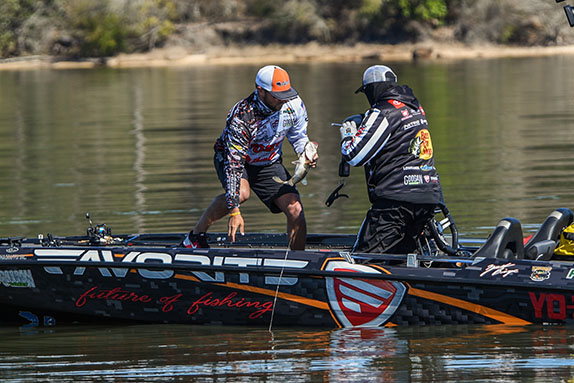 A spinnerbait has produced all of Group A Knockout Round winner Zack Birge's fish this week.

By BassFan and MLF Communications Staff

Zack Birge of Blanchard weighed in eight bass totaling 25-14 Wednesday to win the Group A Knockout Round on day 3 at REDCREST 2021, the Bass Pro Tour championship at Lake Eufaula in Alabama. The five-day competition features a a top cash prize of $300,000.

Birge said that every fish that he has caught so far this week – minus the very last fish of day 3 – has come on a white Omega Genesis TI spinnerbait.

“I’ve been doing pretty much the same thing all week, throwing a spinnerbait around brush,” Birge said. “Overall, today went pretty good for me. I caught more today than either of the two previous days, even though the fishing was tougher overall. I ran around and fished brush, pretty much all over the bottom quarter of the lake.

Dudley grabbed the group's final cut position for the Championship Round by catching just four scoreable bass (2 pounds or heavier) for 10-14. He threw both a wacky-rigged worm and a crankbait.

"I did more cranking today than I've done on any other day," Dudley said. "Those fish seemed to be a little more active. The ones up shallow on the wacky worm, I have to talk them into biting, but the ones I caught on the crankbait were more aggressive."

Kevin VanDam was the first angler outside the cut with two fish for 7-10. One of those was a 5-06 specimen that was the first catch registered for the day and earned him a $1,000 bonus as the heaviest fish of the round.

"I had my opportunities – I fished hard and covered a lot of water and it came right down to the wire again," VanDam said. "It's frustrating because things were coming to me, but I just couldn't get it done today. I've been fishing professionally for 31 years now and I've had some high moments, but this one stings a lot and I'll definitely be thinking about it for a while."

Group A Knockout Round

The following anglers did not make the cut and will not advance to the Championship Round.