BACK
Some Decent Finishes In BFLs

Wirth Taking It Slow In Return To Competition 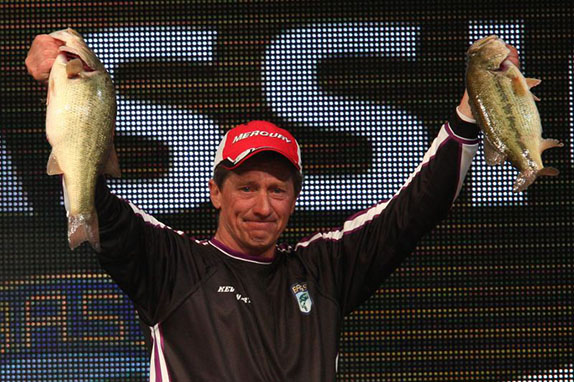 Kevin Wirth made his final appearance on a tour-level stage at the 2012 Bassmaster Classic.

Kevin Wirth walked away from competitive fishing after the 2012 Bassmaster Classic – the 11th straight he'd qualified for – and didn't look back for 8 years. Now the equine dentist and former Kentucky Derby jockey is back in the saddle, so to speak.

The Kentuckian fished seven BFLs in 2020, including three at Old Hickory Lake – the site of his 2008 Bassmaster Elite Series victory. With a top finish of 11th place, his results weren't eye-popping, but the 58-year-old was pleased with the way he held up to the rigors of a long tournament day.

"I had to see how my mind and body would take it after being off for so long – I wasn't sure I could handle it either mentally or physically," he said. "Each time I finished up, I felt like I'd gotten some more instincts back and that I'd been more thorough and better at using my time. I think I caught a limit every day I fished except for two and I was pretty happy with that.

It's a whole process and I ain't in no hurry. This year I'll probably fish some more BFLs and maybe a couple of Toyota Series (events), and then the following year maybe try to go a little higher."

Can he foresee an eventual return to tour-level competition?

"I don't know if I want to be on the road and away from my family that much. It's possible, but things would have to shake out really good. My daughter's a junior in high school this year and she rides horses (in equestrian competitions) all across the country and I need to be around for that. Family is my first priority."

Wirth finished 26th in the 2011 Elite Series Angler of the Year race to keep his double-digit streak of Classic qualifications alive – at the time, it was the second-longest active run to Kevin VanDam's, which was at 22. That fall, he let the 2012 entry-fee deposit deadline pass without ponying up and his name was a glaring absence when the tour roster was announced in January.

His primary sponsorship with whiskey-maker Early Times hadn't been renewed and he'd been unable to put together another deal to replace it. He was also down on some other aspects of the sport, particularly B.A.S.S.' deposit system that forced Elite anglers to try to play catch-up with tournament earnings.

Fishing out of a borrowed, unwrapped boat and wearing a basic pullover with a B.A.S.S. patch instead of a logo-adorned jersey, he rebounded from a sluggish first day of the '12 Classic at Louisiana's Red River to catch two solid bags and notch a 14th-place finish. After that, he didn't pick up a rod and reel for the better part of a decade.

"When I first shut it down and said I was done, I had no desire to fish at all," he said. "Later on there were a few times I thought about going, but I didn't have a boat, just all my stuff in the garage, and I'd end up deciding I'd rather just go play golf.

"I stayed busy with the kids – my son played soccer and we traveled a lot with that and my daughter was riding horses – and it was nice to spend more time with my wife, too."

The urge to get back into action got the better of him last spring. He had some back issues after a three-day practice session at Lake Cumberland and then endured a 2 1/2-week battle with COVID-19 before putting together a run of Top-30 finishes in BFLs. Despite missing one event, he finished 25th in the points in the Music City Division and advanced to the regional.

Wirth admitted he'd be lying if he said he didn't miss a lot of things about pro fishing. He enjoyed the challenge of figuring out a lake, matching his abilities against the best in the game and interacting with his fellow anglers.

He still keeps in touch with some of his former friends/competitors. Last summer he spent a day in the boat at a North Carolina lake with former Elite angler and now MLF commentator Marty Stone after Stone had called him "out of the blue" on his way back from Sturgeon Bay.

"I don't go out fishing without catching them," he said with a cackle. "Are you crazy?"

> Wirth said he has all the business he can handle in his equine dentistry practice. In a couple of weeks he'll leave on an extended trip to treat some Kentucky-bred horses spending the winter in Florida and Louisiana and won't return home until early March.

> Thoroughbreds are his favorite type of horse to work with. "They're a little more docile and a little more personable because they've been handled a lot from the time they were born. It's fun to watch them grow and develop and see what they turn into. They're little athletes – they're really competitive and they love what they do."