BACK
A Day To Remember

Capitalizing On An Epic Frog Bite 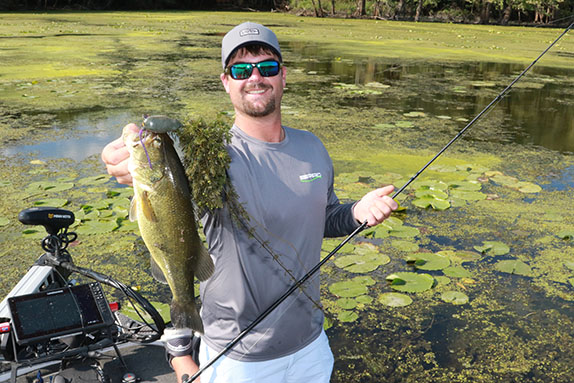 Drew Cook probably wished he had been fishing a Bassmaster Elite Series event rather than mugging for a media shoot. Not that we didn’t enjoy professional rapport, but when I put my camera and note pad down and grab a rod, something special is happening.

The word “epic” is broadly overused, but there’s a reason it exists.

Relatively, the adjective form means: extending beyond the usual or ordinary, especially in size or scope.

By this definition, Cook and and I experienced an Upper Mississippi River frog bite fully meriting the term — EPIC.

Sure, we battled no sea monsters or cyclops and the seductive songs of ill-willed sirens never touched our ears (The Odyssey?); but a full-throttle largemouth beatdown — yeah, that was epic.

Put it this way, we boated 20 solid bass in about an hour and could have easily doubled that number if we hadn’t stopped several times for photos. To say “we left ‘em biting” is no exaggeration; and here’s the cool part:

We caught every one of those fish from a spot no larger than a standard sofa. Here’s how it went down.

Location, location, location is more than a real estate motto — it’s bass fishing bedrock. Running out of Winona, Minn., we found our prime property a long cast into a giant grass mat near the mouth of a slough off the main channel.

The mat had the usual mix of isolated pads and blown-in debris, but when Cook caught a keeper and then scored another on the next cast to the exact same spot, he got that “game-on” look in his eye. 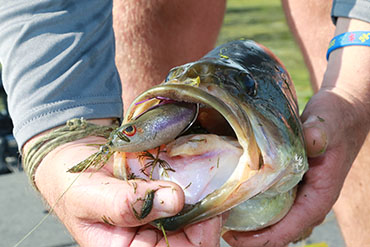 
Not all fish that blow up on a frog end up as well-pinned as this one, but that's part of the game.

“There was something about that spot, it could have been a depression or a log or something right there where the current had blown around and wallowed out a spot,” he said. “You see this with punching, too. You get bit (multiple times) in almost the same hole.

“There’s something about how the bait comes across it that keeps all the fish there. At one point we were both fishing that spot and as soon as our frogs made it to an imaginary line, one of them got blown up on.”

Frogging is frogging and not every bite connected. Of the ones that did, we paused a handful of times for various imaging. These breathers probably helped our cause by letting the fish settle for another round.

“Those river fish are their own breed,” Cook said. “In a tournament, you could’ve probably caught 30, left, come back and fired them back up and get right back to waylaying them.”

> Conditions: The sunny sky, no doubt, kept the fish tucked far under the mat. Early morning, late afternoon or cloudy conditions may have seen the spot less concentrated — further evidence of timing’s importance.

> Flow for the go: In addition to the 8- to 9-foot front-side depths, our spot benefitted from a back channel that kept the water moving on both sides. So, instead of tapering into a shallow flat, this mat had a dual supply route to keep it fresh and well stocked.

> Ambush Alley: Bass like edges and this spot had an isolated patch of pads separating the mat and a strip of open water. Textbook feeding window.

Cook compares this to another stump-in-the-pond scenario: “It was like a New York lake where you can find a big rock on a grass flat. You can catch 50 to 60 fish off that rock.”

> Food: “I remember there was a lot of bluegill popping,” Cook said. “We had fished some dead mats before, so that’s a key reason why the fish were there.”

Tackle for the Task

Shimano Curado DC reels with the I-DC4 digital brake control system ensured a backlash-prone writer didn’t waste time with bird's nests, while the 8.5:1 gear ratio allowed us to gather unbitten frogs and quickly get them back into the strike zone. Cook’s not one to take any nonsense from mat fish, so he spools his reels with 50-pound Seaguar Smackdown braid and pairs them with Dobyns Champion XP 736 rods.

Over the heavy mats, Cook’s not terribly picky about frog color, but he believes the bait’s weight and sound can impact the game — especially on pressured waters.

“Depending on how thick the cheese (algae atop the mat) is, I’ll put BBs from a shotgun shell inside the frog,” he said. “If it’s really thick, I’ll shove tungsten weights in there.

“I’ll use two 1/16-ounce Titan Tungsten weights rather than one big weight, because two weights are in there clicking and clacking for extra drawing power. Sometimes, I’ll put glass rattles in my frog; you just don’t want to use anything that will make the hook hole too big.”

So, right place, right time, right gear; that should do it, huh? Not an incorrect formula, but an incomplete one. The missing ingredients: accuracy and persistence.

We commonly see recently fished mats with line tracks and occasional blow-up holes, but Cook and I left this spot with a two-foot wide stripe of ripped up water that bespoke the narrow lane in which all — yes, all — of our action occurred.

Could we have found a bite within 30 yards on either side? Probably, but why leave fish to find fish? Moreover, a furious flurry tends to prompt the assumption of burning up the spot, but ignore this.

Cook’s summation: Leverage the inherent feeding competition to your benefit.

“It’s almost like offshore fishing; when you fire up a school, you gotta keep after them because if you let them cool down (during a flurry), they’ll stop biting,” he said. “It’s just like catching them on a crankbait in 20 feet of water; as soon as you get that first bite, get him in the boat, put him in the livewell and fire right back out there.”