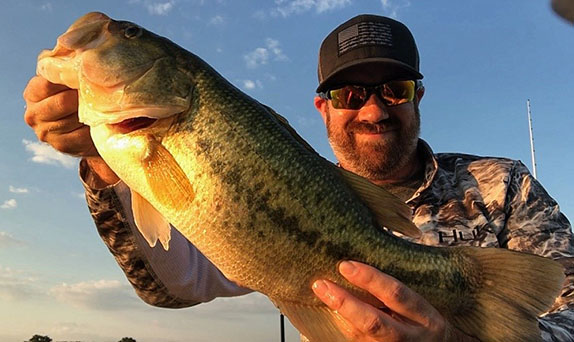 September isn't considered one of the top fishing months in the country's southern tier, but there's some good action to be had on schooling fish.

One of my best fishing friends went out recently to his favorite lake. And a few days before the Texas dove season opened up on Sept. 1, he really whacked them.

As we talked later that evening and he sent one photo after another of chunky largemouths in the 3- to 5-pound range – with one or two even pushing 6 – the postmortem session revolved around why the late summer bass had been so aggressive on the smaller lake he routinely fishes.

“I don’t know, but I think they were schooling,” said my friend Andrew.

Ah, yes, the approach of September and its familiar school bells, virtual though they may be in this year of COVID-19. But whether the kids in your community are still getting their lessons online or in an actual classroom setting as fall 2020 begins, now is the time to target schooling bass in several parts of the country.

In my home state of Texas, September is the month that the state’s most popular freshwater game fish, the largemouth bass, begins ganging up in underwater schools to begin their autumn transition. While some lakes suffer from a bout of early autumn doldrums as water temps start cooling and head for turnover, others offer some prime topwater action as schoolie largemouths start hunting down schools of threadfin shad as they prepare for the coming of Old Man Winter.

The late Ken Cook, the veteran B.A.S.S. legend from Meers, Okla. who passed away in January 2016, was always one of my favorite interviewees on such topics.

Partly because he was familiar with the Lake Texoma region that I call home, and partly because the Bass Fishing Hall of Famer could take complex fishing ideas and turn them into a simple lesson that even I could understand.

Cook’s ability might have stemmed from the fact that he spent plenty of hours in the classroom en route to a degree from Oklahoma State University, a diploma that eventually paved the way for Cook to begin a 13-year career as a fisheries biologist with the Oklahoma Department of Wildlife Conservation.

But after claiming a $100,000 paycheck thanks to his 1983 Super B.A.S.S. derby win on the St. John’s River, the then part-time tournament angler decided that he would trade office views once and for all.

His career change paid off, resulting in six B.A.S.S. wins, 14 appearances in the Bassmaster Classic, three appearances in the FLW Tour’s Forest Wood Cup championship, and more than $1 million dollars in combined career earnings. By the way, $640,000 of that came on the B.A.S.S. circuit, at a time when paychecks were much smaller than they are today.

One of Cook’s wins propelled him to superstar status – the 1991 Bassmaster Classic crown that he won by just more than a single pound on Maryland’s Chesapeake Bay. After winning the ‘91 Classic, Cook became a household fishing name and one who willingly shared the information he had worked so hard to gain.

“If I’m remembered for one thing, I want it to be for helping someone learn how to catch a fish,” Cook said.

In our long ago interview, I had specifically queried Cook about the month of September, the time of transition between summer and fall angling patterns.

“That’s a good time to fish,” he said. “While there are lots of keys that are important at that time of year, first and foremost is the baitfish. And in most places in Texas (and similar southern locations), that is the threadfin shad, who’s young of the year are the most dominant food source for bass at that time of year.

“Baitfish are the deal in September since they’re really reaching the size to become the dominant food source.”

Note that when it comes to September grub for a bass, size matters.

“One of the keys is to match the size of the baitfish (with your lure),” said Cook. “If they’re two inches long, try to match it. Of course, that will change through the month since earlier in September they’ll be really small, around two inches. Later in the month, they’ll be three to four inches. They can really grow quickly.” 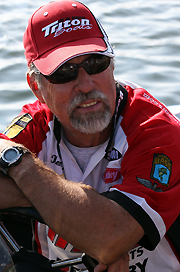 Of course, to match the proper size of the shad, you’ve got to find concentrations of them in the first place. And for that, Cook didn’t always depend on his sonar screen.

“Look at the color of the water,” he said. “If it’s green or muddy, they’ll be shallow. If the water is really clear, then they’ll be deeper most of the day. You’ll need to use electronics to find them in that part of the lake, to locate the depth that they’re holding at.”

As early autumn classes begin for schooling bass, Cook said to be prepared to go on the hunt.

“The baitfish are going to move from main-lake areas to tributaries (this month) and that will affect where the best bass fishing is,” he said. “By October and November, you’re going to be fishing up a creek somewhere, but in September, you are looking for that to begin to happen.”

In Professor Cook’s mind, find the baitfish in September, and you’ve found the bass.

Such was the case when my friend Andrew went fishing recently. But Cook also mentioned that early autumn bass can be caught outside that window of active feeding.

“Spend the rest of your time near cover that has baitfish around it,” he said.

Also note that where there’s one September bass, there is likely another one.

“If you catch one, you should catch another,” said Cook. “That’s true in a lot of cases, although you may not catch it on the next cast. You may have to come back later to try it again and get another bite, but there is always going to be another fish there at some point in time.”

Cook noted that this principle is true even on smaller pieces of fish-holding cover.

“When you’re fishing an isolated piece of cover, you never just want to make one cast,” he said. Take a submerged log, for instance.

“Throwing spinnerbaits parallel to (the) log on its shady side would be my number one choice,” Cook suggested. “After that, try a crankbait and after that, pitch a tube. Try to catch all of the available fish off a piece of cover before you leave.”

Speaking of lures, Cook said that September anglers could fish moving baits regularly now, opting for spinnerbaits, crankbaits, buzzbaits, and the like, all designed to bring a hungry, predatory strike from a largemouth bass looking to put the groceries away.

Which color did he prefer in September? Shad-colored lures were an obvious choice, including those that are pearl with a chartreuse back. When the water had a little stain, Cook looked for a reaction strike with a brighter color like chartreuse, blue-backed chartreuse, or even mustard-colored baits.

Cook relied on an Abu Garcia baitcasting reel with a 6.2:1 retrieve ratio, a 7-foot Fenwick medium-heavy rod with a fast tip or a medium-action Ken Cook Signature Series Lightning Rod for his crankbait retrieves. As for line, Cook used a variety of Berkley offerings, including 20-pound test for spinnerbaits and 10- to 14-pound test for crankbaits.

By now, you’ve probably gathered that Cook believed in bass fishing during the school days of September. In fact, he believed that there were few better times to go fishing than the time of year when footballs are flying, dove season is in session and the first cool winds of autumn begin to blow.

“They’re biting,” Cook told me at the end of our interview. “Go fishing."

Now that’s my kind of homework assignment. Thanks for the lesson, Professor Cook – it’s one I won’t forget.