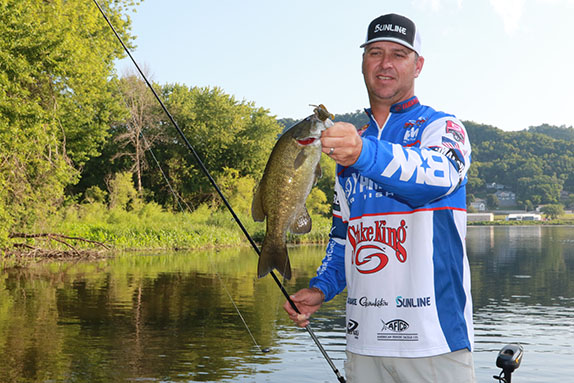 Todd Faircloth holds up a chunky smallmouth that was pulled from a river shoot.

Savvy travelers know that you’ll find some of a town’s best meals, the truly authentic local faves, by leaving the main drag and exploring the backstreets. According to Todd Faircloth, river shoots offer similar appeal.

“A river shoot is not something that’s flowing into the river like a creek or a branch, it usually runs parallel to the river itself,” Faircloth said. “It has some current in it, but not the strong current like you’d have out on the main river.”

Faircloth said these often protected areas can present goldmines of underutilized opportunity with year-round relevance. Setups vary and seasonality dictates much of his selection, but in all but the harshest of conditions, he’s pretty confident in these modest backwaters.

During summer and fall, Faircloth likes an open-ended shoot, as the area benefits from regular flushing. Keeping the oxygen content healthy and pumping plenty of food through the track means happy bass.

Winter may pull fish out of the shoots, unless there’s a significant section of deeper water offering sustainable habitat. Come springtime, Faircloth will be looking for closed shoots, which attract spawners seeking sheltered habitat.

“If the water is high and muddy during the spawn, a shoot that runs upstream is going to be a lot clearer than a closed-ended shoot that runs downstream,” Faircloth said of the spawners’ water-clarity preference.

Like the main river, the fish could be just about anywhere along a shoot. Consistency, however, depends on recognizing the areas of highest probability.

> High and Low: Generally, the outside bank of any backwater artery will hold the greatest depth, thanks to years of carving currents. During low water, the flow undercuts banks and creates a natural shelf that fish will utilize when the water rises.

That being said, don’t swear off the inside banks. If this shallower edge sprouts overhanging trees, that cooler, shaded area may prove irresistible during midday heat.

> The Oddities: Little humps, random rocks, grass clumps, even floating vegetation like duckweed will offer the current break or shade that bass seek. Size varies, but moving water makes each one a likely home, so give each spot a chance.

Depending on the river, you may find largemouth and smallmouth tucked inside a shoot. Knowing this, Faircloth will thoroughly work these little isolated cover spots, as multiple presentations to different sections allow him to maximize the opportunity.

“Usually, the smallmouth are not going to be as tight to the cover as largemouth,” Faircloth said. “A smallmouth is more of a roamer that feeds on the perimeter, whereas a largemouth will tuck deep into the grass, a hole in the middle of wood, or if it’s rock, they’ll get right in the crevices.”

> The Doorway: Don’t let all this potential pull you in too, far too fast; there’s often a good bite or two waiting just a sinker’s throw from the main river. For example, Faircloth and I fished an upper Mississippi River shoot with a mouth sporting laydowns and overhangs on one side and a cluster of habitat features on the other. 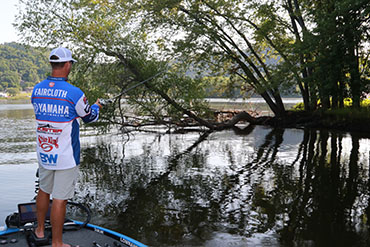 
Todd Faircloth will travel with the current if he's searching for fish in a river shoot.

“That spot had all the ingredients; it had rock to create a current break, it had a little eel grass, a little wood on the bank — it was just a textbook place for them to set up and wait for something to swim by,” he said. “Spots like this aren’t out in the main river current, but they’re not far from it, either.”

Well-known for his flipping/pitching prowess, Faircloth generally attacks a shoot with a one-two combination of a jig and Texas rig. The former’s a 1/2- to 3/4-ounce Strike King Hack Attack Fluorocarbon Flipping Jig, while the Texas rig sports a 3/0 Gamakatsu Heavy Cover worm hook and a 1/2- to 3/8-ounce weight.

Will fish bite other stuff in a river shoot? Sure they will. Spinnerbaits, bladed jigs and crankbaits all have potential, but Faircloth believes his chances of getting bit are best when he’s pitching to specific targets — current breaks and ambush feeding spots.

“I want something that’s going to get down there, get on the bottom where those fish are at,” he said. “You don’t want your plastic or your jig drifting through the water column; you want it in contact with the bottom.

“When you have a river system and that current’s flowing, usually the fish are aggressive. They’re going to bite because they don’t have much time to watch that bait. They know it’s either get it now or it’s gone.”

Of his plastics choice, Faircloth said: “Normally, in the colder water temperatures, I’ll use something that doesn’t displace a lot of water — something streamlined like a Strike King Rodent or a chunk. The warmer it gets, I like a bait with more action, like a Strike King Structure Bug or Rage Bug.”

Note: For trailer use, Faircloth typically snips off about half an inch from the top of his soft plastic and then snips around the top edge to create a beveled look. The goal — a better fit.

“That just creates less drag and when you thread it on a jig, under the skirt, it looks more streamlined,” Faircloth said. “I don’t want a real bulky trailer sticking out.”

Faircloth typically flips river shoots with a 7-foot-4 heavy Denali jig/worm rod and a 7:1 Shimano Metanium reel spooled with Sunline Shooter fluorocarbon. He’ll vary his line size from 18- to 22-pound, depending on current; essentially, he’ll go as light as he can in swifter water to reduce drag and allow his bait to reach bottom.

All in the Approach

“When I’m fishing shallow rock cover, wood cover or whatever, if I’m just trying to find out if there are fish in an area, I’ll go with the current because I can cover a lot of water fast,” Faircloth said. “The other reason is that I can be really stealthy and quiet; I’m not bucking the trolling motor the entire time.

“Now, if I go through an area with the current and I get three or four bites when I just blow through it, if I turn the boat around and go into the current, I can probably get as many bites or more when I go down that same bank.”

In deeper areas, Faircloth wants to be heading into the current, as this is the only way to get his bait down to the target. Going with the flow would pull his bait past the target too quickly for an effective presentation.

Lastly, Faircloth stresses the wisdom of paying attention to where your bites occur. Similar to dock fishing, these river runs often find fish favoring certain sections and types of cover. Noting the patterns equips you for continued success.

“You have to pay attention to detail because, in a river system, you can duplicate a bite,” Faircloth said. “Say you go into a shoot and I get bit on the outside bend, at its deepest portion, you can look on a map and locate that (scenario) in a different shoot.”