Mitchell's Confidence Level Has Been Restored 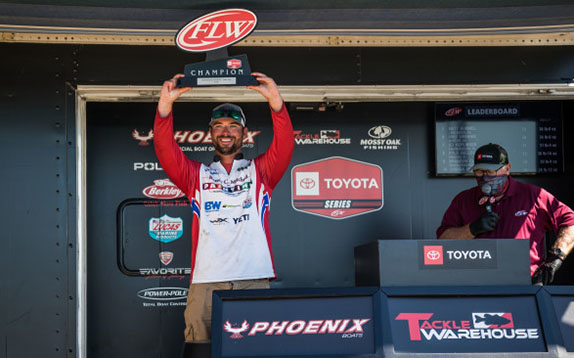 (Editor's note: In observance of the Labor Day holiday, a new First Cast feature story will not appear until Tuesday, Sept. 8.)

August turned out to be a pretty good month for Kurt Mitchell.

The only current tour-level pro who hails from the state of Delaware, Mitchell notched the biggest victory of his career when he triumphed at the Lake Erie Northern FLW Series. He sustained that momentum the following week with a 4th-place showing at the FLW Pro Circuit TITLE Championship, compiling the event's only 100-pound-plus day under the Major League Fishing format.

The win at Erie – his second derby on the venue in as many weeks following a 54th-place finish in the final Pro Circuit Super Tournament – has boosted his belief in his own abilities to a level that he hasn't previously enjoyed in five years as a tour pro.

"When you fish local stuff for a long time and you win a lot of tournaments, you have a lot of confidence," he said. "Then you come out on tour for a couple years and you don't do as well and you lose confidence.

"I finally have that confidence back for the first time at the pro level and it makes a huge difference."

Mitchell has a fair amount of experience with Erie tournaments launching out of Sandusky, Ohio and said that he cashed either the first or second paycheck of his career at such an event. He usually fishes in the vicinity of the Bass Islands, but during the Super Tournament he discovered a series of small sandy places on the western shore.

They were devoid of fish on his final morning of competition in the Super Tournament, but he went back on the afternoon of the day after that event ended and they were loaded. Each of the spots were about 50 yards long with water in the 12- to 16-foot depth range.

"I had six places and two of them turned out to be really good," he said. "The other four, I could usually catch one or two."

Employing a dropshot rig and a Ned-rigged Senko, he averaged 20 pounds per day in the Series event, but on only one of the three days (19-15 on day 1) was his bag close to that number. He boxed a whopping 24-11 on day 2, followed by 15-08 on the final day – a figure that he was certain wouldn't be enough for the win.

"At one point I had to check my GPS to see if I was even moving forward. But after I finally got there and caught 20 pounds, it was all worth it."

He lost a 5-pounder close to the boat on day 3 and was convinced that misfortune had sealed his doom.

"The fight was over and I was thinking that after I caught that fish, that'd be enough," he said. "Then it shook it's head and the hook just flew out. That's really unusual – most of the time when you lose a smallmouth it comes off in the first 30 seconds.

"I also broke off six fish that day and I'm guessing it was because of all the gobies. They'd peck at my bait and pull the line right into the (jagged) zebra mussels."

His win left him just five points from the lead in the Northern Division standings with the final event set for the Detroit River in two weeks.

"It was so crazy – going back in (to the launch on day 3), I didn't think I had it. When I won, it was just a huge relief. I was almost crying on the stage, not because I was happy, but just because so much stress was gone.

"Up until then, I didn't have the confidence I needed to win. Now that I've won one, I know I can continue to be competitive at that level."

> His Ned rig, for which he utilized the same rod, reel and line, consisted of a 1/8-ounce Picasso Rhino Ned Head and a shortened Yamamoto Senko (crushed goby).