Bradford Beavers turned things around after day 1 and went on to post a runner-up finish at Sturgeon Bay.

“No doubt, the whole top 10 would’ve looked different if conditions were different. Tenth place would’ve been 40 pounds. You definitely wouldn’t have seen anybody zero, that’s for dang sure.”

Spencer Shuffield’s words sum up what could’ve been and what was when it came to the Championship Round of the FLW Pro Circuit TITLE Championship on Sturgeon Bay.

After a gentle week, Mother Nature decided to wreak havoc the final day, throwing winds in excess of 25 mph at the pros and making it nearly impossible for many anglers in the Top 10 to even get to their main areas in the open water due to massive waves.

While winner Rusty Salewske and runner-up Bradford Beavers both were able to get on their open-water fish to excel, the rest of the pros had to try and grind it out in protected areas.

If you’d told Bradford Beavers he’d finish 2nd after the practice and first day he had, he never would’ve believed it.

He said the Major League Fishing format (catch-weigh-release, all bass over 2 pounds count) threw him off the first day as he spent too much time without a line in the water. Fortunately, things took a major turn for the better on day 2.

Instead of looking for schools of fish like everyone else, he focused on a large shoal near Egg Harbor – 15 miles north of Sturgeon Bay – picking off single fish he saw on his electronics. He figured he needed 17 fish on that day to make the cut, and he caught that number exactly.

From there, he never deviated from the plan, even when it meant getting beaten up by what he called the scariest waves he’s ever fished in during the Championship Round. Still, despite burning through one trolling motor and then swapping boats to continue fishing, he was leading the majority of the day. With about 20 minutes to go, though, his second boat’s batteries finally gave out and he was forced to go shallow out of the wind, which opened the door for Salewske’s late go-ahead fish.

“Overall, it was an unbelievable day,” said Beavers. “I only lost one in that mess out there [on the final]. So I’m thrilled. Someone had to finish 2nd.”

> Main factor in his success – “Keeping an open mind, especially on the second day. I was fishing water that hadn’t been productive, but I knew if I fished it long enough I’d run into them. And I did.” 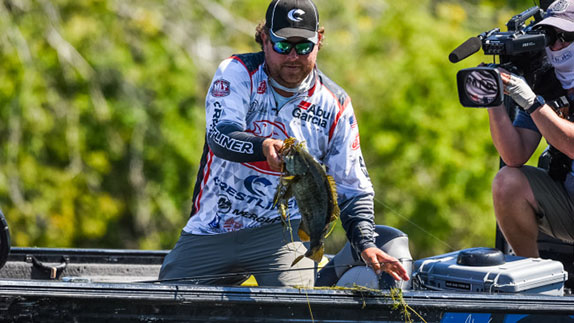 
John Cox logged a 3rd-place finish without the benefit of practice.

New format? No prior experience on Sturgeon Bay? Not even any practice? Of course, John Cox was going to excel.

Fresh off a 3rd-place finish in the Bassmaster Elite Series event on Lake St. Clair, Cox was still driving to Sturgeon Bay from Michigan while guys in Group A were launching for the first day of the Qualifying Round. So his “practice” started when Group B launched on Tuesday.

Fortunately, he’d done so well at St. Clair he decided to look for “something similar” to what he’d just fished there, where he basically bank-fished in the river. The shipping channel was the closest thing, so that’s where he started, though it hardly started well as he went 2 hours in Period 1 without a scorable fish.

“I was worried,” said Cox. “I mean, I started on the lake side and there were hundreds of them down there, but I couldn’t get them to bite for some reason. So I made a move and caught a 4-09, and then I just started hammering them. I was like, ‘Oh, God!’”

From that point on, Cox only left the shipping channel on his second qualifying day, when he sampled a few rivers just to see what was up there. Come the Knockout and Championship rounds, though, he dedicated himself to the shipping channel. He lost five key fish in the Knockout Round that made him sweat out making it to the final, and for a good portion of Period 2 on the last day he looked to be in contention for the win. He didn't catch a bass in Period 3, however, as the wind got too bad even in the channel.

> Main factor in his success – “The combination of the Berkley PowerBait MaxScent Flat Worm paired with the smooth drag of my Abu Garcia reel to handle those smallmouth. That, and the baddest boat and motor on the planet with my Crestliner and Mercury.” 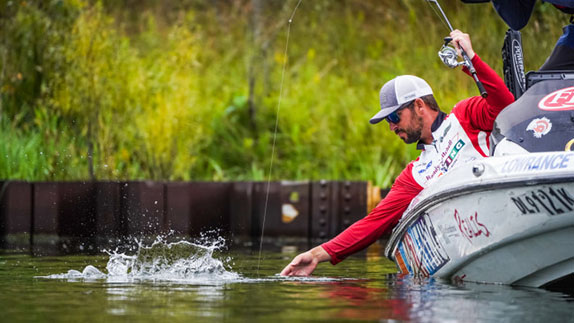 
Kurt Mitchell posted the only 100-pound-plus day at Sturgeon Bay.

Pros and fans alike expected Sturgeon Bay to show out with multiple single-day totals in the triple digits. Turns out there was only one, and it came from Kurt Mitchell on the first day of the tournament.

Hanging in the shipping channel, the Delaware pro caught more fish and weight in Period 1 of the Group A Qualifying Round alone than almost any other angler did all day the rest of the event (the lone exception being Shuffield’s Knockout Round weight of 86-13).

“It was just one of those days that don’t ever happen, but it did,” sasaidys Mitchell.

Unfortunately, the pressure in the channel never really allowed him to have a day close to it the rest of the week, especially the final day, when numerous local anglers were out practicing for an upcoming tournament.

While in the channel, Mitchell said he was focusing on “obvious current seams” around three bridges and a bulkhead, with the bulkhead having a unique feature.

“The one bulkhead I fished had 20 ladders and they were all orange,” he said. “When it was calm, that’s the only time I could get bit on those ladders, and I think it had to do with the baitfish being attracted to that bright color.”

> Main factor in his success – “To be able to fish my places. By the final day, I had five local anglers on each of my spots. There’s not much I could do then." 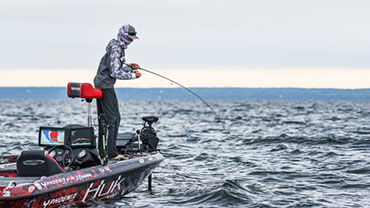 
Kyle Hall said he gave up on his primary area too early in the Championship Round.

Hall was the 2020 Rookie of the Year on the FLW Pro Circuit, but he’s still a first-year pro and a young one at that, being only 23 years old. So he’s bound to make mistakes, and he feels he made one the final day.

“I didn’t stick with my main area long enough,” said Hall. “My trolling motor was dying so fast, but there were a lot of fish down there.”

His main area ended up being a 150-yard stretch around the Sister Bay islands. It was basically a shoal in 25 to 32 feet of water that made a “checkmark under the water and looked like a roadbed down there.”

He milked that area all 4 days, moving with the fish, and on the final day, he found them again and said there were enough down there to make a run at the win. Unfortunately, the conditions forced his hand a bit too soon.

> Main factor in his success – “Garmin Panoptix Livescope. I saw almost every fish I caught this week with that and I could see and watch how they were reacting to the bait. If they didn’t immediately swim away, I could reel up and pitch something else at them and usually catch them.”