Salewske Completes Comeback After 9 Years Away 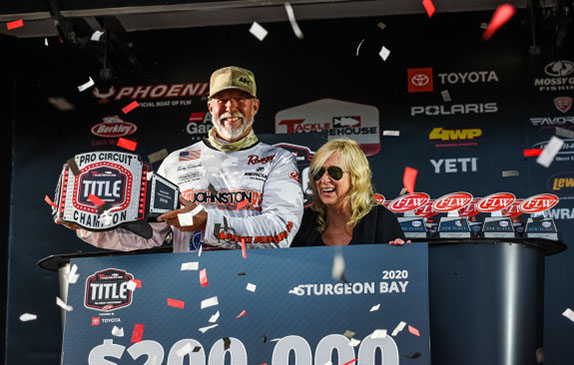 Perseverance was one of Rusty Salewske's primary keys to victory at the FLW TITLE Championship.

Most people love a good comeback story, and Rusty Salewske’s certainly qualifies as that.

Whether you’re talking about the Southern California pro’s career or just his performance at the FLW Pro Circuit TITLE Championship on Sturgeon Bay, it’s seemed like Salewske has always been battling back from something.

After 9 years away from FLW's premier level, he finally came back to face a season rife with hurdles because of the COVID-19 pandemic. He navigated those murky waters to make the TITLE, only to nearly lose any chance of winning on the first day of the Qualifying Round.

Yet, just like his career, he simply never gave up. And even when Mother Nature was throwing its worst at him and the other anglers in the Championship Round, that mantra stuck with him. It’s what propelled him to make a key final move and catch the winning fish with 12 minutes to go to take home the first-ever TITLE belt and $200,000.

With only 2 days of practice and no prior experience on Sturgeon Bay (plus limited time fishing for big-water smallmouth), Salewske knew there wasn’t much room for error.

The first day he checked out the northern end of the bay, and on the second,he went south toward Little Sturgeon Bay.

“I got the same amount of bites, but the ones in Little Sturgeon were a little bit bigger,” said Salewske. “So that’s where I figured I’d go to start the tournament.”

Admittedly, he didn’t really realize what he’d found down there. One spot, in particular, would prove key throughout the event – a long point off Snake Island outside of Riley’s Bay (the bay just north of Little Sturgeon Bay) with scattered rock and few breaks from 13 to 18 feet of water.

“The spot from practice I thought would be my best spot I never caught a fish on in the tournament,” he said. “That point, I figured was maybe my third- or fourth-best spot. Turns out, I caught half my fish there the second day, all my fish there in the Knockout Round and then all but two the final day.”

There was not much to suggest Salewske would even eventually win this event after the first day of the tournament.

While Kurt Mitchell stole the show on Group A’s first day on the water, Salewske finished the day in 16th, well behind the leaders but only 6 pounds out of 10th. Yet, if not for some key words of advice from fellow TITLE angler and Alpine, Calif., resident Wade Strelic, Salewske may never have made it past the Qualifying Round.

“Wade told me that when I caught one, to park for a little bit because there were probably more there,” said Salewske. “That was huge.”

Huge indeed, as he ended up posting the biggest haul of Group A on the second day of the Qualifying Round to make it to Friday’s Knockout Round. And in the Knockout Round is when he finally realized just how special his point off Snake Island could be, catching all his weight there to easily make it to Saturday.

Of course, he was doing this all “fishing blind,” as he didn’t have the Garmin Panoptix Livescope like most everyone else in the field. But that handicap became an advantage the final day when the winds and waves made it impossible for some guys to even get to their areas, let alone stay steady enough to use the electronics to see fish.

Camping on his main point, Salewske posted 28-15 on ScoreTracker in Period 1 and hovered in the Top 3 until early in the second period. But Salewske couldn’t relocate a consistent bite for the next 4 hours, slowly falling behind Bradofrd Beavers before chipping away at the lead in Period 3.
With 30 minutes left, his trolling motor batteries basically dead and trailing by nearly 7 pounds, Salewske finally left his main area and went to a place a quarter-mile away where he had only caught a couple small fish in practice and the first day. You know the rest, as he caught a 2-15 and then a 4-14 with 12 minutes left to take the win.
“I'd go there every day of the tournament to check that spot," he said. "It's right next to a big current hole. To me it was going to be a good spot, but it didn't really materialize during the tournament – except those last two fish.
“When you’re meant to win, things just happen. They did for me this week.”

> Main factor in his success – “Probably my area, but also that help from Wade. I learned a lot this tournament. That first day, I’d catch one and keep going. He told me to stay put and catch what was there. I’d been fishing over them. Plus, he helped me with weights and baits. I was out of almost everything by the last day.”