BACK
Battled Beavers All Day 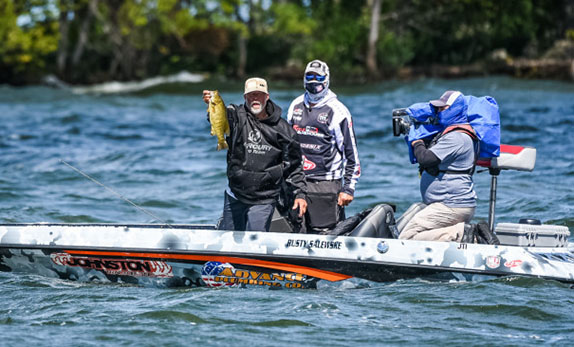 Rusty Salewske caught 13 fish for 48-11 in the final rounded of the FLW Pro Circuit TITLE Championship on wind-pounded Sturgeon Bay.

Two anglers. Two moves with roughly 30 minutes left in the day. One catches the last-minute fish to leave Sturgeon Bay with the first-ever TITLE belt; the other doesn’t catch a fish and comes up ounces short.

From early on in Period 2 of the Championship Round of the FLW Pro Circuit TITLE, it was clear that it was a two-man race for the crown between Bradford Beavers and Rusty Salewske. With big winds and waves ruining many anglers’ hopes, the pair were 1-2 in the standings all day, with Beavers always seemingly just ahead of Salewske.

That changed with 12 minutes to go.

After making a move to a “little-fish spot that was a little more protected from the wind” a few minutes prior, Salewske caught a 4-14 to jump ahead of Beavers by 8 ounces with 48-11. That fish ended up being worth $200,000 and the first-ever TITLE belt.

“Un-be-lievable,” said the Alpine, Calif. angler. “I can’t get my head around it yet. The other nine pros, they know what a rough, rough day it was out there. I was just really fortunate.”

Beavers had no regrets and was ecstatic about catching 48-03 and finishing 2nd after his poor start to the week. Behind him, John Cox (36-14) was the lone competitor to put any pressure on the Top 2 until Period 3, when he never caught a scorable fish.

Beavers said he had never been so mentally and physically exhausted from a day of fishing after fighting the “scariest waves I've ever fished in;” not to mention the format and championship on the line. With winds in excess of 30 mph, the waves were so bad that Scanlon put his boat in the water to start the day and took so many over the bow on the way out to the open water he turned around and put his boat back on the trailer. Buck had a similar experience, as he caught four fish in Period 1, including a 5-10, while battling the waves, but eventually they became too much. Both Scanlon and Buck eventually ended up fishing in the protected shipping channel, where six of the 10 pros would hunker down solely to get out of the wind.

As for those who stuck it out in the waves, they paid the price. Salewske’s trolling motor batteries were barely functional by the end of the day. Beavers’ batteries died and he had to change boats to continue fishing, and then the second boat’s batteries died. And Shuffield, who many thought was the favorite going into the day based on how he’d fished this week, didn’t catch a fish until Period 3, as he simply was never able to even find fish in the brutal waves.

“Today was one of Top 3 worst days out on the water,” said Shuffield. “There were 10- and 11-footers by the end. No doubt, the whole Top 10 would’ve looked different if conditions were different. Tenth place would’ve been 40 pounds.
“I had thousands and thousands of fish in my area. They were all gone today with the wind. You can walk away from a tournament without winning and be okay if it was because of poor execution or wrong decisions. But when Mother Nature takes over and doesn’t give you a chance … it’s a sucky feeling.”

While the waves were no joy to fish in, Salewske admits they did help him. Having been away from pro fishing since 2011, he still hasn’t fully caught up on all the new electronics, as he wasn’t able to see his fish like many of the other top pros were. But with the waves as bad as they were, that fact didn’t matter. He simply was able to hunker down in his main area and grind out bites.

“I just kept telling myself I didn’t want to get back to the camper tonight and feel I could’ve fished a little harder,” said Salewske. “So I stayed on my main spot as long as I could because I’d caught the majority of my fish this week there.”

Yet, with 30 minutes left and only a few pounds back, he made the run to a spot where he hadn’t caught a fish over 2 1/2 pounds all week, promptly catching one close to 3 pounds and then the near 5-pounder to seal the victory.

“My knees were shaking,” said Salewske of that last fish. “I had no trolling motor at that point. I’m drifting so fast. I had no control over the fish. I just had to try and stay calm, and it worked out.”

As for Beavers, many wondered if he’d be questioning “what-if” about his late move to go to the bank with about 20 minutes to fish, seemingly taking his foot off the gas and allowing Salewske to overtake him. Yet, he says he had no choice.

“My last drift, the waves had gotten so bad and my trolling motor was so dead, you couldn’t fish out there anymore,” said Beavers. “I mean, you couldn’t even drift. There’s nothing more I could do.

“Overall, it was an unbelievable day. I caught seven fish in 2 days of practice. I only caught five fish the first day. I caught 16 fish today and only lost one in that mess out there, so I’m thrilled. Someone had to finish 2nd.”