BACK
Leads By More Than 56 Pounds 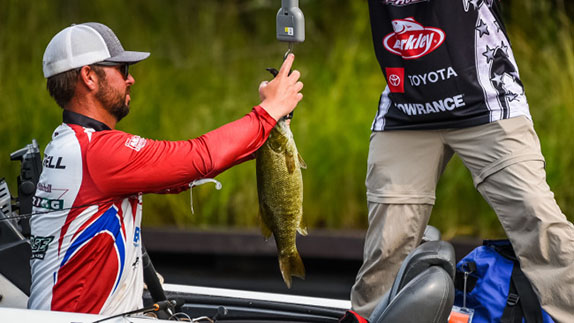 Hanging hefty smallmouth on the scale was a frequent occurrence for Kurt Mitchell during the initial Group A qualifying day at the FLW TITLE Championship.

He lit up ScoreTracker with the biggest fish of the day for his first catch, and Kurt Mitchell simply never looked back.

On a day when a number of top pros struggled to even catch a limit in the typical FLW Pro Circuit five-fish format, Mitchell took to the catch-weigh-release structure with ease on day 1 of the TITLE Championship. Actually, “with ease” doesn’t even do his day on Sturgeon Bay justice.

The Milford, Del. pro caught more fish and weight in the first 2 1/2-hour period of the initial Group A Qualifying Round than any other angler did all day. When it was all said and done, his 119-10 total nearly doubled his closest competitor’s total. His 33 scorable bass were nearly twice as many as his closest competitor and his 5-10 smallmouth was nearly a pound larger than any other bass caught all day.

“It was just one of those days that don’t ever happen, but it did,” said Mitchell.

Grae Buck didn’t have a bad day by any means, considering he’s in 2nd and ahead of his own goal with 63 pounds, and Evan Barnes kept climbing the leaderboard all day, settling in 3rd with 61-10. But calm and cloudy conditions definitely put the smallmouth in a funk.

Casey Scanlon was the lone pro with prior experience with the format, and that helped him to 4th with 57 pounds. And Matthew Steffan parlayed his significant experience on the bay to 5th with 47-01. After that, though, the weights fell off.

“It was a weird day,” said Scanlon. “The fish were grouped up better than I’d seen all of practice, but they were not easy to catch. And even when you’d catch one, they’d all seem to scatter right after. I think the lack of wind and sun hurt.”

The conditions didn't hinder Mitchell, though. In fact, he feels as if they were a key reason for his success.

“That west wind added a little extra current in the shipping channel where I started, and I think that’s what did it. I don’t know why, but something told me to stay in there all practice, though it wasn’t all that good. I did have one current seam where I caught two (4-pounders) and a 5 in practice I thought had potential. Man, did it ever!”

Essentially punching his ticket to Friday’s Knockout Round already, Mitchell is having the best tournament-fishing week of his life. Less than a week ago, he notched his first significant victory at the FLW Series event on Lake Erie. Then today, despite admittedly “doing zero preparation and winging it,” he had one of the most prolific periods in the history of the MLF format when he racked up 70-11 of smallies in the opening period. After that, he “just went fishing” and practicing to get ready for Friday.
“Wednesday may be the most relaxed day of tournament fishing I’ll ever have,” said Mitchell. “My boat could sink and I think I still may fish Friday. It’s just insane.”
Buck also admits he’s a lot more relaxed about Wednesday than he thought he’d be. He figured 40 pounds a day would get him to the Knockout Round and he’s already more than 20 pounds over that pace. Plus, he did it on a day that was much tougher than he thought it’d be.

“I caught a 4-pounder on my first cast, which really calmed down the nerves with the new format,” said Buck. "And there were a pile of them down there, but I couldn’t get them to go. That was how it went all day. I had to cycle through my areas twice. I had to keep switching up spots and even colors.”

It was the same for Scanlon, who said he could pull up on a spot and catch one or two, but after that the fish would “wise up” and shut down.

“I had several flurries where I caught three or four in a row, but it wasn’t like it should’ve been,” he said. "So we’ll see what happens for Wednesday. I’m committed to my area, and hopefully we get a little more wind and sun like they’re calling for so I can make sure I make it to Friday.”

Group A Qualifying Round 1

(Figure at far right indicates weight of angler's heaviest fish for the round.)