Frogs, Flipping Were The Primary Fare 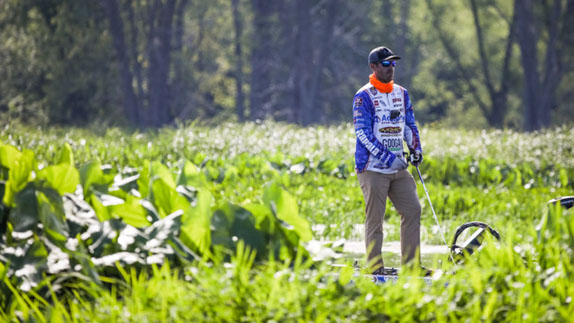 Jacob Wheeler came within one position of his third tour-level win this year.

Following is some pattern and gear information for the 2nd- through 5th-place finishers at the Mississippi River FLW Pro Circuit Super Tournament.

Jacob Wheeler, the No. 1 angler in the BassFan World Rankings, came within 2 pounds of claiming his third tour-level win of 2020. He split his time between pools 7 and 8 and caught the majority of his fish on a frog, but also enticed some with a swim jig and a few on a vibrating jig.

"Utilizing both pools was a huge deal for me," he said. "Pool 8 seemed to be fishing a little better than 7, but getting away from there on day 1 and going someplace where there weren't as many boats helped me settle down.

"I kept an open mind as the water level fluctuated. It's easy to get locked into what you did in practice and fish those same places. The fish moved around a lot during the week."

His targets included blown-in duck weed mats, undercut banks, lily pads and arrowhead points – the latter at times when the water level was sufficiently high. He threw the frog a lot and generated frequent bites from under the vegetation canopy, but his hook-to-land ratio wasn't great.

"I lost a lot of opportunities. I'd say it was about 65 percent, which isn't normal for me – last time I was there it was probably in the high 80s to 90 percent. I think it was the pressure; a lot of people have been out fishing because of (the coronavirus) and those fish have seen a lot of baits.

"Once the water came up I could get into places where I couldn't before and all of a sudden I could reach a 3 1/2-pounder that hadn't seen a frog in a month."

He threw the swim jig primarily on the outside edges of vegetation, particularly when fish would blow up on the frog but miss it. He employed the vibrating jig in a couple of dirty-water locales that he'd fished during last year's Bass Pro Tour Redcrest championship event.

> "I don't think color made that much difference," he said. "What it came down to was which frogs I felt were soft enough to improve my hookup ratio." 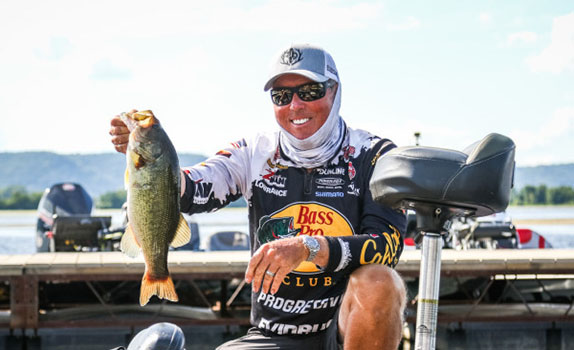 After his 3 practice days, David Walker knew that he'd be unable to compile quality bags by working through a lot of fish – there just weren't enough bites to be had. Therefore, he stuck to tactics that were likely to entice some bigger fish.

"Stubbornness had a lot to do with it," he said. "To me, it was a flipper's event. I got there expecting to catch 30 fish a day, which is normal for La Crosse, but it wasn't like that at all. I knew it was going to be tough and I knew what I needed to do, so I was stubborn and just kept flipping.

"I thought I'd be better off doing something to try to catch a few good ones rather than trying to invent a way to catch a bunch of little ones."

He spent the entire tournament in Pool 8 and focused mostly on hard targets – laydowns, stumps, rocks and anything that acted as a current break.

"There were also some to be caught on undercut banks as well. Everything I caught, you could see what I was pitching to." 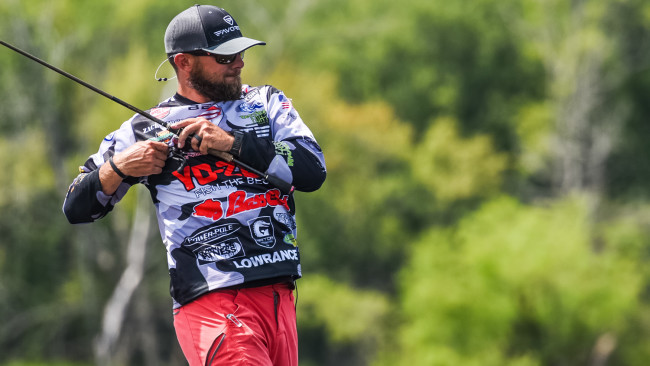 
Zack Birge parlayed a frog/shaky-head attack into a 4th-place finish.

Zack Birge ran a two-faceted program featuring the uncommon combination of a frog and a shaky-head. He also mixed in a crankbait.

"The biggest thing for me was having a good starting spot where the fish were feeding pretty hard in the morning," he said. "After that it got kind of tough for the rest of the day. I just kept running new water each day."

He fished Pool 8 exclusively and did his best work in the vicinity of goose island. He threw the frog on duckweed/eel grass mats and the shaky head in a small depression about 6 feet deep (the surrounding water was no deeper than 4 feet) that had fish in it each day.

"I caught three in my starting spot that were right at or a little over 4 pounds," he said. "I got lucky and they bit good for me that day."

> He threw the crankbait (a Yo-Zuri 3DB 1.5 in gizzard shad) when the fish in the depression were most active. 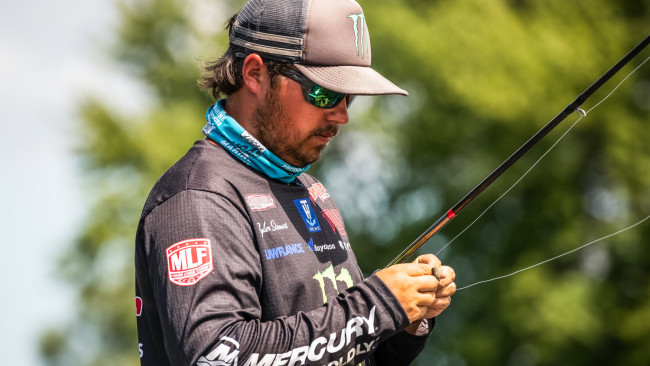 
Tyler Stewart's 5th-place finish was his best to date at the tour level.

Tyler Stewart, a 3rd-year pro from Louisiana, recorded his best tour-level finish and put himself in position to qualify for the TITLE championship with a decent showing in the regular-season finale at Lake Erie. He stayed in the Goose Island area of Pool 8 and threw a frog to matted eel grass with duckweed on top.

"I went there expecting to throw a frog a little, but as practice wound down I realized my best chance to do well was to throw it the whole time," he said. "On the first day of practice I didn't catch a keeper until 5 o'clock, which was when I found that area. On the second day I expanded on the area and got some more bites. The third day I looked around in other places and didn't find anything."

He got about 20 bites on the first competition day, then that number dropped to about a dozen on succeeding days. He had the area pretty much to himself and the vast majority of the fish he caught weighed 2 pounds or more.

"I didn't run around and do stupid things – I stayed in an area where I knew there were some good ones and grinded it out," he said. "The bites came in spurts; I'd get two or three, then nothing for a little while, then two or three more."