Breaking Down The Dollars & Cents

Bassmaster Elite Series anglers will see significant enhancements to the entry fee/payout structure and a slimming of the field to 80 anglers in 2019 as part of an effort by B.A.S.S. to limit the exodus of competitors to the recently-announced Bass Pro Tour.

The revamped entry fee/payout system includes an injection of $2 million from B.A.S.S. and will result in some anglers actually netting $500 by season’s end (before expenses) as B.A.S.S. will guarantee payouts of $2,500 down to last place in eight regular-season tournaments, according to documents BassFan obtained on the condition of anonymity because B.A.S.S. did not make public details of its 2019 plans.

The changes represent the first significant overhaul of the Elite Series financial model since the circuit debuted in 2006 and serves as a stout counter to the entry fee/payout system presented to BPT invitees last week.

The BPT proposal, obtained by BassFan on the condition of anonymity because the BPT also did not make details of its angler proposal public, outlines plans for 14 events – eight BPT tournaments and a championship along with four MLF Cups and a MLF World Championship – with total payouts approaching $10 million.

According to BPT figures obtained by BassFan, entry fees for the 2019 BPT will be $48,375, which is on par with what Elite Series entry fees were for the 2018 season.

With an 80-man field anticipated, the BPT will collect $3.87 million in entry fees. A total of $710,000 will be awarded at each of the eight BPT events, for a payout of $5.68 million. The winner of each tournament will receive $100,000 with 2nd collecting $70,000 and 3rd winning $50,000. Those totals represent significant increases over what’s currently offered by either the Elite Series or FLW Tour.

An additional $1,234,000 will be up for grabs at the BPT Championship, bringing the BPT payout total to $6.914 million, roughly $3 million more than it collects in entry fees. For the BPT events alone, the average payout per angler will be more than $86,000 per angler.

In 2019, the BPT events will serve as qualifiers for the MLF Cups, of which there will be four in 2019, along with an MLF World Championship, which would occur in early 2020 based on 2019 results. There’s an additional $2.916 million available through the Cups and World Championship, bringing the total BPT/MLF purse to $9.83 million. Less entry fees, the BPT will award $5.96 million over 14 events, an average of $74,500 per angler.

Once the 80-man field is finalized, changes to the BPT payouts and rules will be considered and voted on by the anglers.

To simplify, entry fees for the 2019 Elite Series will be $43,000 for qualified anglers. If an angler finishes 80th in every tournament next season, he is guaranteed to earn $23,500 ($2,500 per tournament plus a minimum $3,500 at Texas Fest), reducing the entry fee liability to $19,500. In addition, B.A.S.S. will be offering a limited number (possibly 50) of early registration incentives worth $20,000 each, meaning some anglers will have their entry fees covered with a $500 surplus. 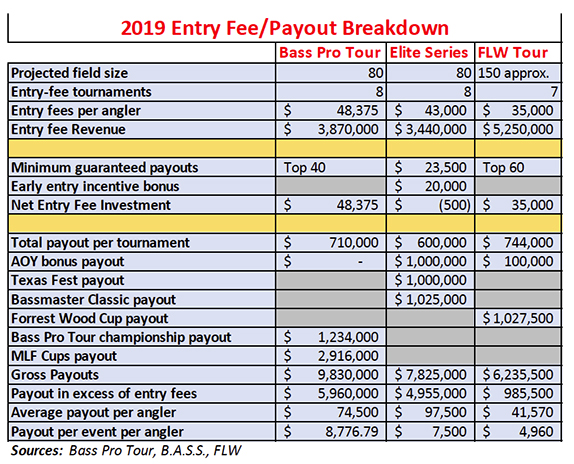 In addition, the top 40 in Elite Series points (half of the field) will qualify for the 2020 Bassmaster Classic, which will be the 50th edition of the event. For anglers who didn’t receive an invitation to join the BPT and for recent newcomers to the Elite Series, the moves could certainly ease the burden that come with financing a season of fishing a top circuit.

Also as part of the retooling, B.A.S.S. will increase coverage of its own events with live streaming feeds from each angler’s boat on the final two days and adding a fourth day of Bassmaster Live.

The Toyota Texas Fest and Angler of the Year Championship will both carry $1 million purses and the Classic purse will be $1.025 million, adding another $3.025 million to the prize pool for a total payout of $7.825 million. After subtracting the entry fee revenue of $3.44 million, B.A.S.S. is prepared to pay out $4.385 million above what it collects in entry fees. However, according to the figures presented by B.A.S.S, that amount is $4.955 million, a difference of $570,000, which isn’t accounted for on the breakdown.

As the Elite Series prepares to reduce its field and with the BPT set on an 80-man roster, the FLW Tour appears to be sticking to the status quo.

FLW announced plans earlier this year to eliminate co-anglers in 2019 and will adhere to a strict 150-boat field starting in 2020, implementing performance-based qualifying criteria to achieve that. However, with the significant amount of capital being pumped into the BPT and B.A.S.S., FLW, once the pacesetter in payouts, now lags behind in a comparison of the three programs.