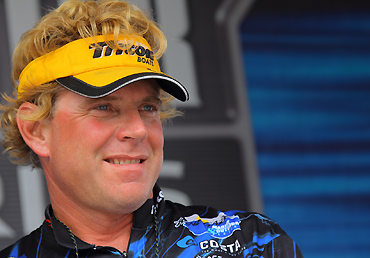 The following appeared in today's coverage of the Ft. Gibson Bassmaster Elite Series in Muskogee, Okla. In case you missed it, Rick Morris had some pretty memorable quotes onstage tonight.

Echoes of Merle Haggard rang through the BASS PA tonight when Morris took the stage. The Virginian looked out at the crowd of 3,600 in Muskogee, then said: "All right Oklahoma! True Americans! What a fishing community we've got here!"

Then, as if he was an Okie from Muskogee, he shouted: "I caught so many big fish it's unbelievable. I didn't get any big bites today but I'm not complaining. I had a great, awesome tournament. I caught them all on the RPM Custom rod, which is my own rod company which I started 5 years ago, American-made blanks, made by Americans, for Americans, no micro-eyes, no China, no Mexico, and no vegetable colors!"

Later, he told BassFan: "In 18 years as an Elite pro, I never heard of a tournament getting rescheduled because of us. They rescheduled a 50-boat championship tournament this week because some of the guys said they weren't going to fish with the Elites here. That forced them to reschedule it. The energy here was just unbelievable. Even with how hot it was, these people, the crowds – Oklahomans are true Americans."

For those wondering, Morris didn't have Merl Haggard in mind when he spoke to the crowd. In fact, he never connected the song to the community until BassFan mentioned it. He was just amped on the fishing energy and American spirit within the community.