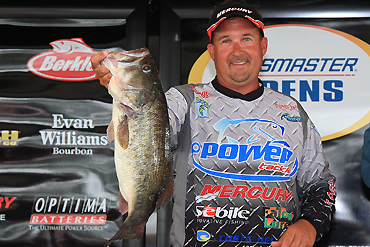 Stephen Johnston closed out a wire-to-wire win at the Rayburn Bassmaster Central Open out of Jasper, Texas Saturday, catching a 15-15 bag that gave him a 3-day total of 57-05. His victory margin over Bassmaster Elite Series pro Todd Faircloth was more than 10 pounds.

Johnston, a guide who lives in nearby Hemphill, also moved into the No. 3 position in the Central points behind new leader Todd Castledine (5th at Rayburn) and James Niggemeyer (9th). The Top 2 in the final points earn berths in the 2010 Bassmaster Classic.

Niggemeyer and Faircloth (5th in the points) have already secured Classic spots through the 2009 Elite Series points. If either or both end up in the Top 2 after the finale at Louisiana's Atchafalaya Basin in November, the berths would go to the next anglers on the Elite Series points list, with Texan Matt Reed first in line.

Johnston used Texas-rigged worms and football jigs to catch shad-gorging bass off ridges. Full details of his winning pattern will be posted soon.