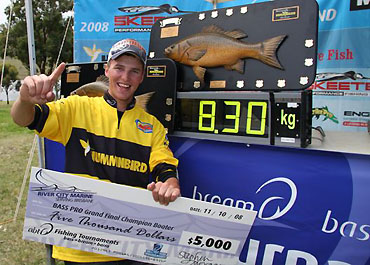 The guy who won the co-angler championship at the recent WON Bass U.S. Open at Lake Mead was a home-state competitor – Chris Faehling of Pioche, Nev., who compiled a 3-day total of 25.64 pounds. The guy who finished right behind him by a little more than half a pound was a long, long way from home.

Carl Jocumsen hails from a town called Toowoomba in the Queensland Province of Australia. At age 24, he's far and away his country's top bass angler, having won both the BASS Grand Final (the Australian equivalent of the Bassmaster Classic) and the Angler of the Year (AOY) on the Australian BASS Pro Series in 2008. The latter title earned him an expense-paid trip to the U.S. from Skeeter that included participation in the Open.

He was in 7th place going into day 3 at Mead, during which he was paired with Bassmaster Elite Series pro Fred Roumbanis. He made a big move with an 8.78-pound sack that included a 3 1/2-pounder caught at the end of the day.

"He's good, real good," Roumbanis said. "I told him he should come over here and fish some tournaments. He's really into finesse stuff – he was throwing a little grub on like 3-pound braided line – and he's a master at it.

"I learned some stuff from him that gives me some ideas for some of the lakes we go to. He's a great guy and it was just an awesome experience fishing with him."

Steve Morgan, director of the Australian Bass Tour (ABT) and the Australian Fishing Championships (AFC), detailed for BassFan some of Jocumsen's accomplishments in his native land:

> When he first began fishing on the pro side, he had a boat license but did not yet have a license to operate a car. His mother had to drive him to the lakes and to the top of the boat ramp, and then he took over from there.

> He pulled off a clean sweep during season 3 of the Australian Fishing Championships TV show, winning all four bass events.