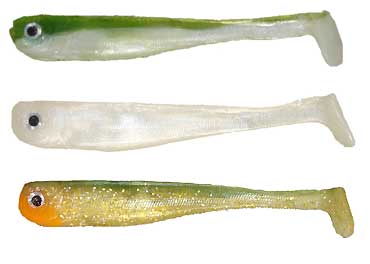 There's a fair amount of buzz about Tabu Tackle right now – it's got its pro staff in order, including its latest signee Fred Roumbanis, and the Open Water Series jig recently helped Dave Lefebre beat up on the Okeechobee bass. The company will be onsite at the Bassmaster Classic, inside the Tackle Warehouse booth (Tackle Warehouse partners with BassFan through the BassFan Store).

Along with the Open Water Series jig, Tabu will also display and sell its new Tiny Tim swimbait at the Classic. The Tiny Tim is manufactured in conjunction with Optimum Baits – a much-respected worm, swimbait and hardbait manufacturer based in California. Optimum's also the creator of the Furbit frog, and imports lures for Ima.

Tabu's Michael Murphy describes the 3-inch Tiny Tim, which will feature Fred Roumbanis on the packaging, as a finesse swimbait. "Swimbaits have been coined as a power-fishing technique," Murphy told BassFan. "Many have thrown them only to see the fish of a lifetime come up and nose the bait, or just merely nip the tail. Much like you'd downsize from a jig to a finesse worm, there are times you may want to downsize from a 5-inch swimbait to our 3-inch Tiny Tim. It's so unique, you can even dropshot it. Nobody's done something quite like this, and it's been killer so far in our fishing."

Also notable about the Tiny Tim is the body cavity directly behind the head. Murphy takes a rubber-core sinker, removes the rubber, threads a small hook through the sinker body, then inserts the package into the cavity, with the hook-point sticking out the back of the bait.

Murphy added that the company is well-stocked for the Classic. There'll be 7,000 jigs there, and 5,000 packs of swimbaits (five to a pack), so be sure to stop by the Tackle Warehouse booth to check 'em out.