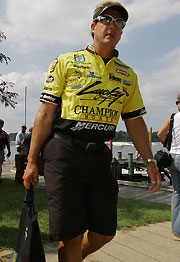 (Editor's note: BassFan spoke with Rapala after this story was published. Additions to the story appear below in blue.)

For 10 years, Skeet Reese has been the face of Terminator Lures, but that all changed this afternoon when he received word from Rapala – which had recently agreed to purchase Terminator – that his contract would not be renewed. He said the news was a surprise, because he expected to continue with the Terminator brand after Rapala's acquisition.

"Rapala's no longer supporting and working with me in regards to Terminator," he said. "I was a little surprised to find out today. They said they had to tighten up their budget. After 10 years of working with the Terminator brand, I'm sad about it. I felt like the people at Terminator, along with myself and Jimmy Houston (the other pro originally associated with the brand) had done a good job of growing together. We've been pretty instrumental in the growth of the brand, so it's sad to part ways.

BassFan spoke with Reese after close of business, and Rapala could not yet be reached for comment. Reese noted that Jimmy Houston and Rob Kilby are still with Terminator. BassFan confirmed with Brent Chapman that he will continue to represent the Terminator brand this season as well.

Rapala director of field promotions Mark Fisher told BassFan that the decision was financial in nature, and had nothing to do with Reese's relationship with Lucky Craft. "When things like this happen in this industry, it has nothing to do with the angler – his skills or promotional value," Fisher noted. "It simply comes down to dollars and cents and budgets. With the acquisition of the company, the budget only went far enough to keep two guys." (Houston's contract was already in place at the time of acquisition. Kilby and Chapman were extended. – Ed.)

Reese's situation is problematic for a few reasons. First, most of the current Terminator packaging features Reese's likeness. That will likely continue as stores sell through existing product, even though he's no longer associated with the brand.

His current wrap is Lucky Craft, so he won't need to make any changes there. It's not known whether his association with Lucky Craft, a major competitor of Rapala, factored into the decision.

One other notable item: He's been using Terminator spinnerbaits, buzzbaits, and jigs for so long, he's not really sure what else is in the market that he'd like to be associated with. "Am I a free agent now? Absolutely. Will I look at (other bait-sponsor) possibilities if they come my way? Absolutely. But I'll take my time. I won't rush anything. To tell you the truth, I haven't fished any other brand of spinnerbaits or jigs in I don't know how long, so I don't really know what's out there that I'll be happy with."