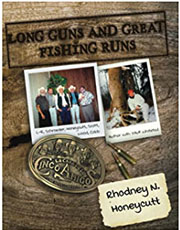 Rhodney Honeycutt’s memoir, Long Guns and Great Fishing Runs, delves into Honeycutt’s life in the woods and on the water with his parents, grandparents and later, dignitaries of the hunting, fishing and celebrity world.

Honeycutt, the son of Bass Fishing Hall of Fame inductee Blake Honeycutt, was indoctrinated into the outdoor life early through his grandfather, grandmother, and father. From there, his love and respect for the great outdoors was born. By the age of 6 he’d shot his first squirrel and by age 9 had a nearly 10-pound bass to his name.

Honeycutt next found himself at the dawn of the professional bass fishing craze that shook the fishing world in the late 1960s. His first-hand accounts of rubbing elbows with the likes of Ray Scott, Tom Mann, Roland Martin and Forrest Wood in those early days would be enough to fill anyone’s lifetime. However, his professional bass career was cut short by winning the U.S. military’s draft in 1971, and soon after he was shipped off to boot camp to support his country.

Upon his return to civilian life, Honeycutt would soon forge lifelong friendships with Scott, Bob Cobb, Johnny Morris, Wood, and others who have become household names in the outdoors industry.

In this memoir, Honeycutt talks of his hunts with racing legends Dale Earnhardt and Richard Childress, hunts with Ray Scott at his northern Saskatchewan Ghost Lake Ranch, and the many fishing escapades he shared with Scott and others at La Casa De Los Cinco Amigos at Lake Novillo, Mexico.

But Honeycutt didn’t just fish and hunt with his buddies. He made sure his family was involved with the outdoors too as he took his kids on safari in Africa or over the ridge in his home state of North Carolina hunting deer or turkey. His outdoor activities always included a respect for the outdoors and those who taught him as a young child.

Long Guns and Great Fishing Runs is not just another book filled with accounts of amazing fishing and hunting trips. It’s a book about a man, his life in the outdoors and the love and respect he has for it and those he shared it with.

To purchase the book, contact Redhawk Publications at 828-475-2384 or send an email to pthompson994@cvcc.edu. Or to order a copy, visit https://tinyurl.com/RhodneyHoneycutt.

The author will donate 25 percent of the net proceeds to the youth and conservation programs of both the Bass Fishing Hall of Fame and the Catawba Valley Wildlife Club.