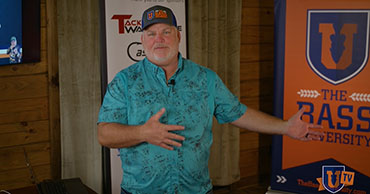 Pete Gluszek spends hundreds if not thousands of hours per year on the water, working on his own game and helping others to improve theirs. “When Mike (Iaconelli) and I started Bass University, we wanted to build the best training platform out there,” he said. That’s why they’ve recruited the best of the best to teach their specialties, hard-earned lessons earned on the water and in competition.

Still, he knows that classes only go so far. He hearkens back to his days studying civil engineering. He knew that he could learn a lot from his textbooks, but certain lessons can only be knocked out in the field. That’s why he maximized (and continues to rely on) his classroom lessons, but recognizes that they’re just part of the game.

It starts with good note-taking. He’ll be sure to write down not just the date and location he’s fishing, but also the day’s weather and prevailing weather trends. Sometimes simple notations, such as the depth at which he caught his fish, make a huge difference. “I used to use a spiral notebook,” he explained, but now his iPhone does the heavy lifting.

He implores all anglers to develop confidence lures. “You need to have a set of tools you can consistently get bit on,” he said. Solid casting, which can be learned in the yard or the living room, as well as on the water, is also a key to being successful. “Don’t let the only time you practice casting be when you’re on your boat.”

Next, he suggests that you find smaller bodies of water – places you can cover quickly – where you’ll get bites on a regular basis. That allows you to keep the fundamentals solid, “like practicing your jump shot.” It will keep you in good form to get lures in and out of cover, practice your hookset and learn to fight fish properly.

Next up is electronics. Even if you have 360 and MEGA Live like he does, if you don’t know what they’re showing you might as well not own them. “Lock your rod lockers,” he said. “Spend time looking and working with your units.” Perhaps go to a known piece of cover, like a brush pile, to see how it reads. Then start building waypoints of different key spots, which in turn will help you to develop a pattern.

Most of all, consider trying out situational practice strategies. This is a concept he derived from great coaches like Duke University’s Mike Krzyzewski. With 30 seconds left, down by one point, Coach K certainly had a strategy – or several strategies – to earn the winning basket. Furthermore, he didn’t leave it to chance. His teams would practice execution until they puked. Similarly, Gluszek puts his students through drills: It might be you have an hour left in the Bassmaster Classic and need a keeper, or need a kicker. Or perhaps just strategizing putting limits in the boat every day. Either way, the pressure and the time crunch makes anglers think critically.

If you want to learn some of the other aspects of Gluszek's guide to becoming a better bass angler, including why he still buys and relies upon paper maps, check out his full video, available only by subscribing to The Bass University TV.