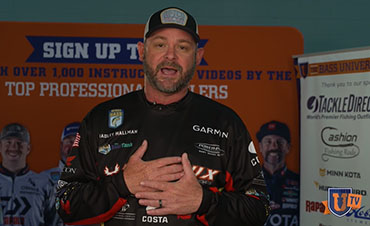 Bassmaster Opens pro and former FLW Tour winner Bradley Hallman makes no apologies for using forward-facing sonar. He loves it and has embraced the technology age of bass fishing. Nevertheless, he recognizes that not everyone is in that same camp.

“It’s just a controversial thing right now,” he admitted. Some people get bent out of shape because it’s expensive. Others think it’s takes the mystique or intrigue out of fishing. If you’re not ready to put it on your boat, he said there are times when you may be at a competitive disadvantage, but you can still find your way into the winner’s circle on occasion.

There “ain’t no lollipops,” if you want to win that way. You have to be able to get into places others won’t go. That requires a lot of time on Google Earth. He’ll look for boat ramps in places that are otherwise tough to access. If he finds fish nearby, then he’ll figure out how to get in during the tournament. If he can find several places like that, he’s built a milk run. The goal is to cover tons of water, ideally virgin water, because the anglers using forward-facing sonar can pick and choose their specimens. “It’s almost like sight-fishing,” he explained, because they can elect to maximize their time by fishing only for the right quality bass.

He believes that anglers who want to disarm their forward-facing adversaries typically need to go shallow, usually less than 8 feet deep. There are six scenarios where he feels that gives them a consistent opportunity to prevail.

The first is when fishing around aquatic vegetation including milfoil, hydrilla and pads. Those areas always hold fish. The second is sight-fishing, which he considers the “great equalizer.” The third is creek fishing, especially early in the year. That’s when all of that work to gain access comes into play. Docks are number four, as they too always hold some bass.

Next up is current-related fishing. “This is probably the highest percentage,” he explained. It works well in a wide range of water clarities. Finally, high water gives the bank beaters a leg up. It opens up the whole lake. The bass migrate to the bank and power fishing in and around newly-flooded cover is the best strategy.

“That’s about it, and that’s the problem,” Hallman said.

However, there is one way to use technology to beat technology. If you’re one of the growing number of competitors who embrace today’s improved aluminum boats, you can outfit it to beat the field. One way to do so is with a winch – it’s not legal to use it during competition, but you can use it prior to events to learn about hard-to-access places. Another valuable accessory is a battery-operated limb saw, for the same reasons. Finally, make sure you have a cell phone with you, not only for satellite imagery, but also to call a friend in the circumstance that you get stuck.

If you want to learn some of other strategies for beating forward-facing sonar, and how Hallman applies them on different types of waters, check out his full video, available only by subscribing to The Bass University TV.