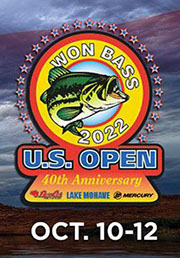 The largest and most prestigious bass fishing tournament in the Western U.S. reaches a milestone in 2022 with the holding of the 40th WON BASS U.S. Open, Oct. 10-12. For the first time, due to historic low water levels, the event will be held on a body of water other than Lake Mead and will feature an expanded Sponsor’s Expo and coincide with a ceremony inducting the inaugural class of the WON BASS Hall of Fame.

The 2022 event will be based out of at the Edgewater Casino in Laughlin, Nev., where the Sponsor’s Expo will occur at the Edgwater Casino’s E-Center Convention Center, as will the WON BASS Hall of Fame induction ceremony. Daily takeoffs and weigh-ins will occur at Katherine Landing at Lake Mohave Marina in Bullhead City, Ariz. Both the Sponsor’s Expo and the inaugural WON BASS Hall of Fame induction ceremony will be open to the public and all are welcome to attend.

WON BASS Tournament Director Billy Egan said that the initial letdown of not being able to conduct the U.S. Open on Lake Mead was tempered by the enthusiastic support of the new host city.

“We wouldn’t have foreseen competing the WON BASS U.S. Open anywhere other than Lake Mead, but the historic low water conditions forced a move,” said Egan. “The Laughlin Tourism Commission, Visit Laughlin, the Edgewater Casino and other area hotels have really embraced the event, offered up their world class facilities and partnered with us to help the event maintain the legacy it has been known for; we are grateful for their help in making this happen and they made it an easy as possible transition.”

The Sponsor’s Expo will be held at the 27,000 square foot E-Center located adjacent to Edgewater Casino. The registration and sponsor showcase event will be held on Sunday, Oct. 9 from 2 to 5 p.m. and will feature dozens of vendor booths showcasing wares for both anglers and attendees from the general public.

The Hall of Fame inductions ceremony will occur immediately following the conclusion of theSponsor’s Expo. The WON BASS Hall of Fame has been established to recognize the efforts of competitors and individuals instrumental in the industry who have left indelible marks on the organization and the Western U.S. through WON BASS.

Egan said the time to recognize people who have made significant contributions to WON BASS and the U.S. Open had arrived.

“After 40 years of WON BASS events, it's time we start recognizing those who have been friends and assets to the organization,” said Egan, “and the 40th anniversary of the event is the perfect time to do it. These individuals and others who will be inducted in the future are our foundation, and the people deserving of recognition for their contributions. We look forward to sharing this special night with them.”

The three-day long tournament will begin Oct. 10, with a champion being crowned on Oct. 12 at the conclusion of the final weigh-in. Takeoff with 200 pro and 200 AAA anglers will commence at safe light and weigh-ins will occur in the afternoons each day.

Pro anglers will be competing for a prize package that will include cash and a 2023 Bass Cat Cougar FTD powered by a Mercury ProXS 250 outboard, equipped with Power-Pole Shallow Water Anchoring System and Next Gen Lithium Batteries – a package valued at more than $85,000.