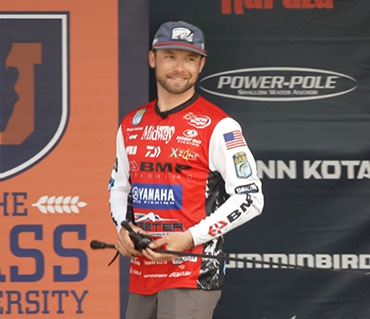 Most weekend anglers know about the importance of pitching and flipping, but not all of them understand the difference.

“I would say 90 percent of the time people say ‘I’m going flipping,’ but they’re actually pitching,” said veteran pro Brandon Palaniuk. Flipping is when you have a fixed amount of line out, never releasing more. In pitching, you pick out a target and create a cast while releasing line. He explained that you start with the rod tip high, then as you drop the tip the bait swings forward, and finally you raise it back up with your wrist to get distance. That creates momentum.

The key is to manipulate the bait so that it’s a quick, accurate presentation. “I want that bait to just barely make a ripple when it hits the water,” he said.

The reel is critical for that. Palaniuk uses a Daiwa Tatula PF (“Pitch and Flip”) that requires minimal effort to engage the spool. He likes an 8.1:1 gear ratio, but noted that it’s not perfect. “The problem with higher gear ratios is that you start to lose more power, so we offset that with a bigger handle,” he explained, noting the 100mm handle with oversized knobs. For a rod, he prefers a 7’6” heavy-fast. “The length is going to give you leverage and control over the fish,” he explained, and the comparatively light tip enables him to pitch a wide range of weights.

In soft cover, like grass, he prefers Seaguar Smackdown braid, but noted that it does not work well in harder cover like wood, where it tends to dig in. There he uses Seaguar Tatsu fluorocarbon. He finds that 22-pound is often a good “in-between” strength – 20 is sometimes too light for big fish in heavy cover, and 25 struggles with lighter weights and smaller baits.

In Florida, where the video was filmed, he tries to keep his bait selection simple. A 5-inch Xzone True Center stickbait gets the call much of the time. Elsewhere, he might use a range of other options, including various craws and creature baits.

“When that fish bites, don’t just set that hook instantly,” he advised. “I like to let them swim off.” He’s also a strong proponent of setting the hook cross-body, which maximizes power. He shakes the bait in one place – using his forearm, not his wrist – and keeps a semi-slack line in anticipation of the fish of a lifetime grabbing his lure. You never want your line completely slack or completely tight, he said.

He wants his weight to be as light as possible, particularly in silty bottoms. “They don’t want to suck all of that muck in,” he said of fish that watch the bait plummet to the bottom before striking. He also tends not to peg a weight unless absolutely necessary, believing that a free-sliding sinker gets more bites and results in more fish landed, especially when using heavier weights.

If you want to learn some of Palaniuk's additional tips for pitching and flipping, including why it’s important to be able to cast with either hand, check out his full video, filmed on the Elite Series stage, available only by subscribing to The Bass University TV.