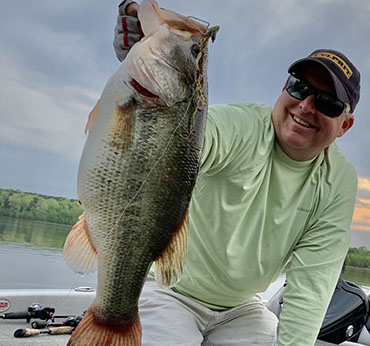 “Looking for Signs” was shot in March, when fish were spawning. This was a very fun show to watch since there were lots of frog bites and suspense-filled follow ups.

The water was not clear enough to see the fish, so I employed a 1-2 punch, but often just the first punch was needed.

The game plan – first to cover water, since I was in an unfamiliar area with no idea if there were bass around. So I started fast, even catching a 5-pounder on a buzzbait. Once I figured out bass had moved up in canals to spawn, it became a frog and a Culprit Water Dragon deal.

The whole theme was finding beds without seeing them. A frog is a perfect way to find them since it is on the surface and if a bass looks at it you can often see a swirl or just tiny movement. The swirl is sometimes almost like you might have seen something, but you’re not quite sure. So as soon as I think I saw something, I stop the boat with my Power-Pole anchors and switch baits. If I am convinced a fish is there, I’ll spend a good amount of time fishing for it.

The big female might still be lurking after you catch a 2-pounder as well. Either way, if you even think you saw a tiny swirl or caught one, make repeated casts to the same spot. I often spread my casts out by mere inches to insure I’m coming across the nest without actually being able to see it. The key is to fish slow once you start in with the follow-up bait.

Once I know a bed is there, I break out the Culprit Water Dragon, which is a 7-inch lizardtype bait, but with bigger back legs, gills and more detail that the bass can’t take around their nests. It even has a little flat spot on the tail to help it wave at and irritate bass. If I found a fish with the frog on this show, I caught every one of them with the Water Dragon, but often it didn’t go beyond the frog. It is such a rewarding way to fish, almost like hunting in a way. You are definitely the predator and have to use a lot of stealth to catch them in this scenario.

My gear consisted of a 7’3’’ Falcon Amistad rod for both techniques, as it offers strong backbone, but with just enough tip for accurate casts, which is of critical importance when target-fishing. My Frog was black and blue and my Water Dragon was junebug with a matching 5/16-ounce junebug Eco Pro Tungsten weight. Dark colors seem to be the deal for dark water.

The 5/16-ounce size Eco Pro is a standard for me in shallow water. I will adapt if needed, but I keep coming back to that size around shallow cover in spring. The extra 1/16 makes it easier to cast and feel the bottom – it is amazing how much control that little extra weight affords over the more popular 1/4-ounce size. Pack them all, though; I’ve seen times when all they would bite is the lightest 1/32 size, so it always pays to experiment, but I like to start with as much control and speed as I can.

If you watched the show, you’ll be pumped for spring. I caught the Wednesday airing at 11:30 a.m. and just had to go fishing afterward. That's my goal with this show ... to make you want to go fishing!