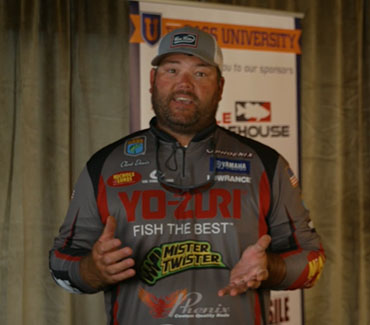 An addiction to crappie fishing helped Alabama pro Clent Davis dial in one of his favorite and most lucrative ways to catch fish: Dissecting brush piles.

“This is my favorite thing to do in the world,” he said. It’s not simple, but once refined it can be a winning tournament strategy. Indeed, it was a prime factor in his 2018 Forrest Wood Cup victory.

There are different types of “brush,” to be sure. The plastic fish attractors that are gaining popularity are easy to fish because you’re less likely to get hung up in them, but Davis believes that they take more time to get populated with bass than natural materials. As for the type of limbs, some anglers swear by cedar, willow, oak or some other wood, but he believes it’s more about location. “I think the best brush pile is probably the one that’s in the best location,” he said. “They’re not going to come to it just because you put a brush pile there.”

Once you’ve located a pile holding bass, he said that the No. 1 mistake anglers make is to line up incorrectly. You want to be able to hit it fast and move on to the next one. “In a perfect world, I like to spend 5 minutes per pile,” he explained. Forward-facing sonar has taken some of the guesswork out of the process. He likes to keep the target about 60 feet away, which doesn’t spook pressured fish but also makes him more able to hit it consistently.

In the springtime, before the spawn, the bass tend to suspend “more than any other time of year,” so he relies heavily on a Duel 110 jerkbait and a hollow belly swimbait. While many anglers think of this as a clear water pattern, Davis believes that when springtime water muddies up, the fish gravitate to brush. When that happens, he’ll help them find their bait by choosing something with a hard thump, like a big single-willow spinnerbait or a 1/2- or 3/4-ounce Jack Hammer.

In the summertime, a big worm is his top choice, although he also uses a jig, and in the late summer the jerkbait bite gets strong again.

“Usually in the fall it goes back to springtime for me,” he said. That means the fish are often suspended over and around the brush piles. He returns to the jerkbait and also likes a big topwater. If the bite gets tough, he’ll turn to a Ned rig utilizing a weedless Nichols Toadstool head to minimize hang-ups. That’s how he filled out his limit several days during his Cup victory. “It gets bit better than anything,” he explained, although he noted that you may lose some fish if you don’t either get them away from cover quickly or exercise extreme patience.

He learned one trick he uses when fish are clearly in the brush piles but won’t bite from Scott Suggs. He’ll “make like a jet ski” and do some donuts to get the food chain moving and the bass stirred up.

If you want to learn some of the other secrets of how Davis attacks brush piles, including his favorite rod, and explanation for why he prefers a longer rod in this scenario, check out his full video, available only by subscribing to The Bass University TV.