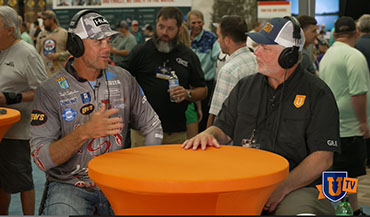 A decade or so ago, Texas pro Todd Castledine used to get samples of lures from overseas, via Strike Pro. Some panned out and a few were disasters, but he kept his eyes open for sleepers that would give him a competitive advantage.

“I was always the guy who wanted to throw different things,” he said. “If everyone was doing one thing, I always wanted to do the other.”

One day a lure with an odd L-shaped bill showed up. It wasn’t particularly natural or modern-looking, but he threw it in his boat and decided to test it out during lipless crankbait season. He crushed the other anglers in his boat, catching nearly 30 pounds to their 12. He needed more, but wasn’t sure how to get them. “It was the only one in the U.S. at the time.” Eventually, he got Strike King to license it from overseas, and they recently introduced it as the Hybrid Hunter and the Hybrid Hunter Jr.

While everything except the distinctive bill makes it look like a traditional crankbait, Castledine said that it’s a mistake to think of it that way. “The worst thing you could ever do is categorize it as a crankbait,” he said. Instead, think of it as a combination of a jerkbait, lipless crank and a swimbait. Unlike crankbaits that dive from the get-go, this one just gradually goes down and then stays level. It’s also very loud and very buoyant. When it hits something, he advised, leave it alone “and it will do all the work on its own.” Similarly, when it pushes into the grass, don’t rip it, just give it slack and it will work its way out most of the time.

It’s also beyond erratic: “We never know where it’s going to go.” That means it’s at its best when reeled at warp speed. “You can reel this thing faster than any other crankbait so I only throw it on a 7:1. You can’t reel it fast enough, and the faster you reel it the crazier it gets.”

That means that in addition to excelling in grass, it also does well when burned on clear-water lakes without vegetation, like Table Rock. Mark Zona has confirmed that it’s also a smallmouth killer.

Oddly enough, “typical good crankbait colors are not good” with the Hybrid Hunter, at least according to Castledine. He likes clear, jerkbait-type colors and ultra-bright patterns, too.

The only change he makes to the lure out of the package is to add Owner Zo Wire treble hooks, which he said are “stupid sharp.” He typically fishes the bait on 20-pound fluorocarbon and does not use a crankbait rod. “It’s a power bait,” he concluded.

If you want to learn some other information about where and how Castledine fishes the Hybrid Hunters, check out his full video from the 2021 Bassmaster Classic, available only by subscribing to The Bass University TV.