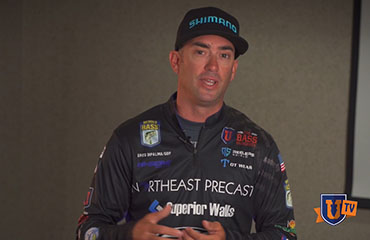 Bass anglers are taught from an early age that muddy water – and particularly cold, muddy water – is a nightmare, something to be avoided rather than welcomed, but New Jersey pro Greg DiPalma looks forward to it at times. That’s because it can make the bass more predictable in certain situations.

“I’m here to tell you right now, muddy water can actually be your friend when it comes to fishing,” he said. In the spring and fall, he knows it’s likely going to come at some point, and he’ll map out a game plan for finding the bass most likely to bite. This usually means largemouths over smallmouths, simply because they feel vibrations better and move shallower to gain comfort. He’ll add that knowledge on to seasonal patterns and try to get where the fish will be most comfortable.

“The baits are just as important as where to look,” he added. That means subtlety likely goes out the window. If the bass can’t see, then “noise is super-important.” He also considers his lures’ vibration patterns as well as color. In the latter category, he leans heavily on chartreuse, white and dark options. “Black/blue is probably one of if not the best,” he explained. He also said that sapphire blue is a known killer in low-visibility scenarios.

A spinnerbait is an obvious choice because you “can cover a ton of water.” This is the only situation in which he’ll add a soft plastic trailer, usually some sort of boot tail, instead of just a trailer hook. While a Colorado blade provides the most thump, sometimes fish key in on a willow-leaf because it more closely replicates the noise of the baitfish, so keep your options open. His second favorite for a hard-thumping presentation is a ChatterBait.

When bass are tight to cover, a bulky jig is his No. 1 choice. “I can put this right in their house and that’s why a jig is so important,” he explained. Usually that means black and blue. He’ll add at least one or two rattles and chooses his trailer to get the most vibration, which usually means a crawfish imitation with big claws.

One of the most exciting ways to fish in the mud is with a buzzbait, especially as the fish gravitate ultra-shallow. “I think it draws bites in muddy water,” DiPalma said. He likes a smaller model with a large blade, which provides a big target yet still allows him to fish it slowly. Normally he fishes a buzzbait on braided line, but when the bass can’t see it well that often causes him to miss a lot of strikes, so he’ll switch to fluorocarbon to slow down his reaction time.

As muddy water moves down a lake or river system, the upstream areas that the mud first invaded are often the first to clear, so as things settle, head back to where it started and keep the bite going.

If you want to learn some of the other secrets of how DiPalma attacks seemingly difficult muddy water scenarios, including why he thinks his Humminbird 360 is such a critical tool, check out his full video, available only by subscribing to The Bass University TV.