Day 1 of U.S. Open canceled due to wind 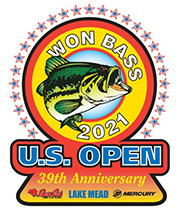 In keeping with a commitment to maintaining the safety of the competitors, WON Bass officials have canceled Monday's opening round of the 2021 WON Bass U.S. Open due to predictions of extremely strong winds and small craft advisories for Nevada's Lake Mead.

As the event grew closer, weather forecasts were calling for sustained winds to 25 mph with gusts that could exceed 40 mph. This left tournament director Bill Egan no choice but to make the call.

“None of us want to see a day of an event like the WON Bass U.S. Open canceled, but there really was no other decision to make,” said Egan. “The safety of our anglers and friends is paramount, so we made the call to cancel Monday’s fishing and make it a two-day championship.”

The first day of the event is now scheduled to commence on Tuesday and the final round will occur on Wednesday. Takeoff from Callville Bay Marina is at safe light with daily weigh-ins from the floating docks at the marina beginning at approximately 2 p.m. PST.

On the final day, the pro winner will receive the keys to a 2021 Bass Cat Puma FTD powered by a Mercury Pro XS 250 Four Stroke outboard valued at $64,000, along with cash prizes. The weigh-in will be live-streamed at www.WONBassevents.com and the WON Bass Facebook page.