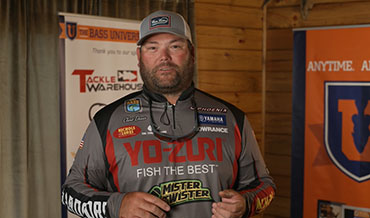 Regardless of the season, Bassmaster Elite Series pro Clent Davis loves to make the run up to the next dam and catch bass out of heavy current, particularly on the TVA and Coosa River impoundments.

“I grew up learning to fish behind tailraces,” he said. They continually produce because they have everything a bass needs to survive – specifically current and the baitfish that current attracts. While he often makes them a stopping point throughout the course of the year, he takes a seasonal approach to getting the job done.

January is often the start of the spring bite in these tailraces in the Deep South, and usually by February “it’s on fire,” he said, but that doesn’t mean they’re always the best location. “The springtime can be very tricky behind these dams, depending on how much rain we’re getting and the water color. Water color is the No. 1 no-no on this deal.”

When the water clarity permits, though, he’ll often make a beeline for the tailrace, where a Scrounger is his absolute favorite lure. “It’s just a hard bait to beat,” he explained. He typically fishes them on a Phenix 7’7” Feather baitcasting rod with a 7.3:1 Abu Garcia Revo spooled with 16-or 20-pound Yo-Zuri T-7 Premium Fluorocarbon. The fish are strong and bulldog toward big rocks, but heavier line would add too much drag to the lure. He usually starts with a 1/2-ounce Scrounger, but will go up to 3/4- or 1 ounce in heavy current. In low-current situations he’ll switch to a fluke-style lure and in stained water he employs a spinnerbait. No matter what, he lets the current do the work.

“The No. 1 thing people do wrong is they try to fish their baits,” He said. “You want to let the current work the bait for you.”

In the summer, he sticks with the Scrounger and the fluke, but adds a topwater like the Yo-Zuri Pencil. If it’s allowed in the state and the tournaments you fish, put a Front Runner ahead of the topwater. “It’s a fish-catching machine when you have a lot of small bait,” he explained. Almost all of your strikes will come on the front runner, not the topwater behind it.

He’s careful to monitor power generation apps from TVA and Alabama Power, as appropriate, and encourages anglers to be on their best spots during the short heavy-current windows that the dams provide. That’s when the best feeding occurs. When it slows down to a trickle, or none at all, he might pull up stakes, head to the back of a creek and pull out his flipping stick, looking for a kicker largemouth bite.

In the fall, Davis sticks with – you guessed it – the Scrounger. When baitfish are small, he’ll go down to a 3/16-ounce version on a spinning rod with a Tiny Fluke or a Keitech fluke-style bait as a trailer, and also uses tiny Yo-Zuri crankbaits.

If you want to learn some of the other secrets of how Davis attacks tailraces, including his thoughts on where the resident bass go to spawn and how to catch them, check out his full on-the-water video, available only by subscribing to The Bass University TV.