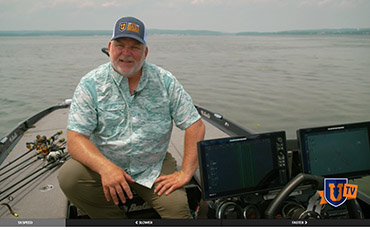 Hydrilla and milfoil may be the “Big 2” when it comes to aquatic vegetation, but Pete Gluszek knows that they’re not the only game. One of his other favorites is an overlooked species normally referred to as “eel grass.”

“It really is a powerful piece of habitat that we don’t hear much about,” he said. Why is that? “It’s tricky to fish. It’s tricky to understand.” That’s because it’s stringy and often floats in large clumps, snagging just about any lure that gets in its way.

Eel grass often grows on large flats on the tidal rivers near his New Jersey home, and he cautioned anglers not to be intimidated by those large playing fields. He uses a variety of tools to figure out how, when and where to catch them. The first is his Humminbird Mega 360. “It’s such a powerful weapon at being able to find isolated patches to be able to follow grass edges,” he explained. After that, he uses his eyes, figuring that slick spots are where the grass is topped out, and looking for visual cues such as baitfish activity. If he’s not getting bit he’ll continue to cover water until he finds something more productive, and he noted that the key areas often change from day to day.

In the warmer months, he uses a one-two punch of frog imitators to locate the fish, and often to catch them as well. The first is a hollow-bodied frog, which has a big presence that enables the fish to find it in a heavy mat of grass, even with a slight ripple. A popping version like the Terminator Popping model makes even more disturbance. When the water is clearer and/or calmer, he prefers a buzz toad like a Zoom Horny Toad. He fishes the toad relatively fast, with his rod tip up, popping it a little when it gets bogged down in floating grass. He typically employs a straight retrieve, but occasionally he’ll “pulse” it to spit more water and trigger a strike. The key is that if a fish strikes and misses, you need to keep it coming. Often they’ll hit again.

With both frogs, he keeps it simple: black and white most of the time, although he’ll add some chartreuse accents if he sees large numbers of bluegills or perch in the area.

Where the eel grass is sparser, he’ll cover water with a spinnerbait or ChatterBait. If he knows the fish are there, but strikes are relatively few, that’s when he pulls out a soft stickbait. “I’m going to have to get slow and low on ‘em,” he said.

If there’s relatively little floating grass and the stalks are not topped out, Gluszek also likes to fish a big topwater like a Pencil Popper, which sometimes has the drawing power to pull fish up out of deep water better than the frog. He noted, however, that if there’s floating grass around that can be a pain.

If you want to learn more about Gluszek's strategies for fishing eel grass, including how he rigs “The Dean’s Rig” soft stickbaits, check out his on-the-water video, available only by subscribing to The Bass University TV.