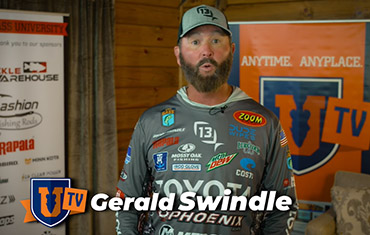 Two-time Bassmaster Angler of the Year Gerald Swindle knows that a buzzbait is a deadly year-round tool for catching big bass. The biggest stringer he ever caught on Smith Lake came on a buzzbait in 51-degree water when others were chucking Shad Raps, and he doesn’t hesitate to throw one in the middle of the day. Nevertheless, despite the fact that his reliance on this special lure helped get him to the pro ranks, once he got there he shied away from it for a while.

“Buzzbaiting can be a very, very emotional roller coaster in tournament fishing,” he said. To combat the losses and the ensuing depression, he’s developed lots of little tweaks to make sure he maximizes the landing percentage.

“There is no such formula for a 100-percent hookup,” he said, then added, “I can get you in the ballpark where you’re at the highest percentage.”

It starts with tackle. He uses a 7’4" medium-heavy rod with a decent amount of give in the tip. He pairs it with a 6.8:1 reel, noting that with anything faster he tends to overwind, and spools the reel with 18-pound Sunline Shooter fluorocarbon. Monofilament has too much stretch, and with braid he ends up pulling the lure away from too many bass – and when he does that the line often ends up tangled in the blade.

He’s picky about his buzzbaits and customizes his own from his preferred list of components. Clackers usually don’t make the cut, primarily because they don’t skip well. He prefers a War Eagle-style 3/8-ounce flat-head paired with the blade from a 1/2-ounce lure. The combination allows him to creep it back. “The slower you can reel a buzzbait most of the time, the better off you’re going to be,” he explained. The best wire, he added, tends to be heavier. Lighter versions don’t produce the right sound, aren’t durable and tend to lose fish.

The biggest change that Swindle has made over the years is to essentially abandon skirts in favor of soft plastics on the back. The Zoom Horny Toad is among the most widespread favorites for this purpose, and he’s used it, but it’s not his favorite: “I’ve lost enough on it to fill up an 18-wheeler,” he joked. Instead, he prefers the thinner, softer Zoom Z-Craw, which has the same kicking action and still skips well, but is thinner and softer for better hookups. He uses the Junior version “99 percent of the time.” When he wants a smaller bait with less flapping action, he’ll often switch to the Zoom Z-Craw. In the fall, when the bite is especially tough, he’ll occasionally go to a 1/8-ounce buzzbait with a diminutive Zoom Split Tail on the back for a more streamlined presentation that represents smaller baitfish.

Swindle always keeps his rod tip at 10 or 11 o’clock and cautioned that if you point the rod tip directly at the lure you’re going to miss lots of strikes. He also likes to “buck that horse” when he approaches cover, giving the lure a slight slip or hesitation that’ll trigger a waiting bass. As for right-running and left-running blades, he said they’re not needed. Your rod is your steering wheel, he added: “Take that rod and you can coach that bait to where you want it to go.”

If you want to learn some of Swindle's other secrets of how to catch more and bigger bass on buzzbaits, including how he bends the lower wire with needle-nose pliers for a perfect running angle and better hookup percentage, check out his full video, available only by subscribing to The Bass University TV.