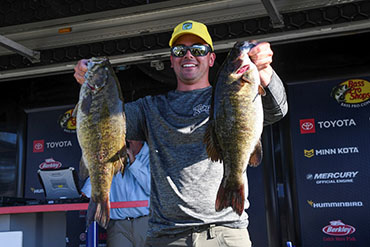 Fall’s seasonal transition took a big chunk out of Cal Climpson’s practice findings, but the Canadian pro located enough quality to assemble a limit catch of 27-07 to lead day 1 1 of the Bassmaster Northern Open at the St. Lawrence River/1000 Islands out of Clayton, N.Y.

The recent arrival of cooler weather and big winds have cracked the whip on large schools of smallmouth that had been lounging in deep water. With schools fragmenting and scattered fish starting to push shallower, consistency has become challenging.

“I had quite a bit of fish located in practice, but a lot of my spots were dry today, so I had to work really hard to get that weight,” Climpson said. “I wish I knew where they moved to. The fish that I caught were ones that stuck around in the same depths as they were in practice.

“This is classic September; the fish are in all depths right now. The water temperature has dropped 7 to 8 degrees in the last week and a half and the fish are not as grouped up as they were in August.”

Knowing that Lake Ontario has historically produced a higher quality of fish than the St. Lawrence – river fish burn more calories in the higher current – Climpson began his day in the big water.

“I snuck out into the lake, but then it started getting rough, so I ended up in the river around noon,” Climpson said. “What I caught was about 50-50 between the lake and the river.”

For his Lake Ontario work, Climpson ran about 7 miles out and targeted an area of rock and transition bottom (rock to gravel) in 25 to 35 feet. Noting that large, isolated boulders were the key spots, Climpson said his Garmin LiveScope played a key role in his success.

“I’d be casting around until I saw one and then I’d start targeting it,” he said. “I was able to catch a couple of fish that I saw on LiveScope.

“When it was calmer this morning, I was using the trolling motor to try and cover some water, but once the wind picked up, I just let it (propel my drift).”

Climpson said he found that the fish were on the move, even within the spot he fished. To counter this, he made measured drifts that worked progressively across the hard bottom. Drifts that yielded a catch earned a follow-up pass.

Back in the St. Lawrence River, Climpson caught fish with a similar game plan.

Anchoring his bag with the 6-09 he caught in the lake, Climpson said he tried a variety of baits, but caught all of his fish on a dropshot. While keeping his bait particulars guarded, Climpson said he used a 3/4-ounce weight to keep his rig on target in rough water.

“I actually caught fish on three different dropshot baits,” Climpson said. “I just rotated through the baits if I didn’t get bit.”

Cooper Gallant of Bowmanville, Canada, is in 2nd place with 27-00. Committing his day to Lake Ontario, Gallant fished a long point using a dropshot to target several key areas in depths of 7 to 30 feet.

“I had (most of) my weight by 10 and then I upgraded once around 1 o’clock,” Gallant said. “Then I just went looking the rest of the day.

“I knew I was on a 25-pound bag in practice and I knew 27 was possible. Honestly, today I thought I had 25. I didn’t even weigh them. I just like to throw them in the livewell and surprise myself at the end of the day.”

Gary Adkins of Green Bay, Wis., is in 3rd place with 25-10. Spending his day in the lake, Atkins said that carefully controlling his drift speed for natural presentations was essential to his success. He also benefited from a change in conditions.

“I caught my biggest fish – a 5-07 – around 1 o’clock,” Adkins said. “Actually, once the wind picked back up, the bite got better because of more current. I’m on a structure that needs current and when that current blows up on there, the fish move up to feed.”

Sharing the 3rd-place spot is Kevin Park of Waymart, Pa.

Friday’s takeoff is scheduled for 6:30 a.m. ET at the Antique Boat Museum. The weigh-in will be held back at the museum at 2:30 p.m.

Here are the totals for the early Top 10: