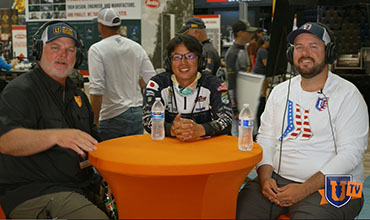 Two-time Bassmaster Classic qualifier Takumi (Taku) Ito has quickly become a fan favorite thanks to his winning personality and early dominance on the water. He half-jokingly claims that he doesn’t like big bass because they tend to overpower his slight frame, but in his short U.S. career he’s shown a propensity for catching them. That’s typically thanks to his love of innovative finesse-fishing techniques.

“I don’t like power-fishing so I’m always fishing finesse,” he said. “In Japan, there are many, many anglers fishing, so it’s high pressure.”

While U.S. tournament waters may be slightly less pressured, popular venues like Lake Fork are loaded with highly educated fish, so he tries to show them something different to get an edge on the competition. That led him to some distinct realizations during this year’s Fork Elite Series event, in which he finished 7th.

“Many people use shaky-head, but Taku used wacky-style straight worm,” he said, referring to himself in the third person like Hall of Famers Charles Barkley and Rickey Henderson. He wanted to show them a presentation similar to a weightless wacky-rigged Seno, but in deeper water that’s a technique that simply takes too long. Waiting it out, especially if there’s wind or current, is an inefficient way to fish.

Therefore he wacky-rigged his 7- and 8-inch straight-tailed worms on jigheads. When the fish were suspended in the trees, he favored 1/8-ounce, and when they were holding among the rocks and stumps on the bottom he upsized to 1/4- or 3/8-ounce.

What’s distinct about this presentation is that he does not typically deadstick it. Instead, he’ll let it sink to the desired depth, using 360 Mega Imaging and Live Scope to locate the fish, and then he’ll shake and wiggle it back to the boat. The swimming action moves a lot of water, allowing curious fish to find it, and his best bites often come when the billowing worm deflects off of cover.

He thinks that spinning gear is far better for this presentation than baitcasting gear because he can better feel what the worm is doing at all times, but “finesse” doesn’t always mean light line. On day 2 at Fork he used a main line of 30-pound braid with a leader comprised of 25-pound fluorocarbon.

His second choice in finesse scenarios is a Neko rig, which he uses when fish are on the bottom. It falls fast into the strike zone and he can shake it in place and get a good sense of the bottom composition.

When he’s fishing around light cover or no cover at all, he often utilizes a wacky dropshot, with the same straight-tailed worms, albeit with a 3/8- or 1/2-ounce sinker. A heavier weight allows him to fish it faster, while a lighter weight forces him to slow down.

Of course, these techniques aren’t just for largemouths in the South. “Smallmouth love Taku and Taku loves smallmouths,” he said. When fishing for them he’ll cycle through a number of baits utilizing various scents, until he finds what they want best. Sometimes he’ll go down as small as a 2-inch lure.

Unlike some anglers, when fishing for bronzebacks he shies away from a braided main line, which he believes moves too much water. Instead, he goes with straight Seaguar Tatsu Fluorocarbon, usually 5- or 6-pound.

If you want to learn some of the other secrets of how Ito catches monster bass with finesse, including why he prefers the period after 10 a.m. over the morning bite, check out his full video from the Bassmaster Classic (filmed before his victory on the St. Lawrence River), available only by subscribing to The Bass University TV.