'Marathon Man' gears up for another record run 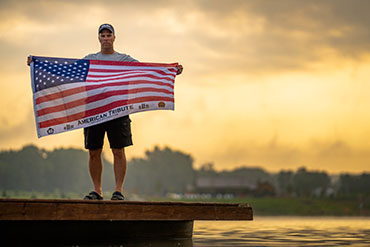 After seven World Championships of Freshwater Fishing and a Guinness World Record for most fish caught in 24 hours, you’d think that "Marathon Man" Jeff Kolodzinski would simply settle for a leisurely day on the water. Not so. His tireless desire to help people through the language of fishing has driven him to his next Marathon Mission 9/11 to benefit military families and first responders.

“I’ve always had a heart for our military members and their families,” Kolodzinski said. “They’ve given so much to our nation and I feel like it’s the least I can do to help them in their time of need.”

For years, Kolodzinski has done 24-hour fishing marathons benefitting military families like Fishing For Life’s “NextGen” Program, which pairs kids and mentors for military families and Gold Star Families who are going through difficult times.

“It’s an incredible program and there have been so many beautiful stories to come out of this program. It’s been huge for both the kids and the adults,” he said. "We weren’t meant to walk through life alone. In fact, we all were created expressly for relationships, so I want to make sure that these kids can find the support and healthy relationships when they need them most. That’s why I want to see Fishing For Life’s Next Gen program increase in reach and funding to help more families of our service members.

“With this being the 20th anniversary of the events of 9/11, I want to serve our first responders and our military families who both pay such a heavy price for our country. I want them to know that their sacrifice and commitment is valued – valued in a way that compels us to act."

In May of this year, the Marathon Man publicly shared the goal of catching 2,977 fish in honor of each life lost on 9/11.

“I hope to break not just the Guinness Record, but even more I want to break the sense of hopelessness and isolation that so many people from these groups often have. The Marathon Man event is an unmistakable effort to say we remember—then and now. And I can think of no better way to honor them than to bring together a coalition of people who also appreciate their service."

So, what else would a 24-hour fishing maniac do other than organize a fishing fundraiser?

Kolodzinski adds: “I know there’s a lot of desperation out there – especially as of late. I know there are people really struggling. I hope and pray that they see what a small group of devoted people are doing to encourage them and honor their sacrifice and be reminded that their service is neither lost nor diminished.”

Kolodzinski hopes to raise $50,000 or more to support Fishing For Life’s Next Gen mentoring program along with first responders of the Spring Bay, Illinois Volunteer Fire Department. You can pitch in to help the Marathon Man and fellow supporters reach that goal here.

Watch the quest for 2,977 fish and a message of encouragement for any or all the 24-hour event here.