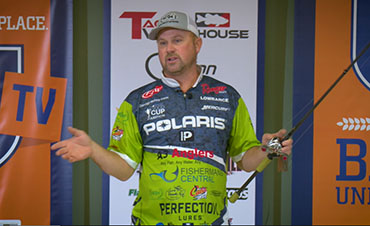 David Dudley’s been studying the swimbait game since it first made national waves, and he considers it a trend that is still on an upward trajectory. With each passing year, it usurps more territory from other techniques, to the point where he almost always has two specific rods on the deck of his boat: one for a swimbait and one for his reliable wacky worm.

“This is a technique that you need to get familiar with,” he said.

He’s picky about his swimbaits, though, and has tested dozens of them to find the ones he likes best.

“Not all swimbaits work,” he explained. “It actually makes me puke how many swimbaits are out there that I can just call a liar.”

Even if you have the right lure, it’s critical to match it to a properly-designed and appropriately-weighted jighead. “The motor is the jighead,” he said, meaning that if you don’t use the right amount, it won’t make the tail vibrate adequately. He believes that bass can be exceptionally picky about unrealistic jigheads, so he wants natural looking eyes, and he won’t settle for anything other than Gamakatsu hooks. He and his son pour them at home and surprisingly he doesn’t like them painted. “I cannot stand a painted head. I hate it with a passion.”

With straight-tailed swimbaits, he almost always uses an underspin. When it comes to boot-tails, he divides them among solid-bodied models (like a Keitech) and hollow bodies. In the latter categories, some of his favorites come from 6th Sense, Berkley, and Basstrix. Of the latter, he said “They’re basically double-dipped.” That means you can peel off the outer layer, so you have to be careful.

The hollow versions excel when fishing big schools where you’re likely to catch “20 or 30 bass in one place.” The solid ones are better for “nickel and diming” or for mop up duty for after you think you’ve caught most of the aggressive bass.

As for a reel, when asked what gear ratio to use he’s not specific: “Whatever. I don’t care. It’s all a discipline thing.”

He is picky about his line, though. He’s a stickler for a braided main line, usually 20- or 30-pound. “I feel so many more bites,” he said. To that he attaches a fluorocarbon leader of 10- to 16-pound, depending on cover, water clarity and expected fish size. He uses a length of line that comes down to just above his reel and attaches it with an Alberto Knot.

If you want to learn some of the other aspects of Dudley’s swimbait secrets, including his favorite colors for solid-bodied boot-tails and the best ways to prepare a bucktail for success, check out his full video, available only by subscribing to The Bass University TV.