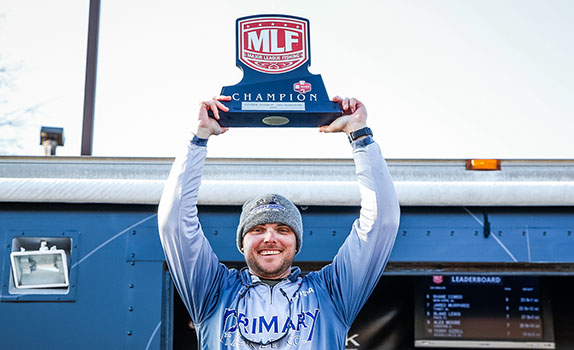 MLF Pro Circuit angler Jimmy Washam brought a five-bass limit to the scale Friday weighing 18-15 to win the Lake Guntersville Central Toyota Series with a three-day total of 58-05. Washam prevailed by a 5-10 margin over runner-up Sloan Pennington and earned $55,600.

Washam said day 1 was a grind, with only two fish in his livewell by noon; however, he just happened to land on them later in the day.

“I went back to an earlier spot I’d fished and they were just turned on,” he said. “They were trying to take the [bladed jig] out of my hand. I caught the 7-05 and the 4 in the last 10 minutes.”

Washam brought in his smallest bag of the tournament on Thursday (day 2), but it was big enough to provide him with a 5-plus-pound lead going into the final day.

His pattern throughout the week was a carbon copy of most other anglers in the field.

“The fish were in the grass,” he said. “That was no secret.”

Like most pros, Washam had an array of rods and baits on the front deck, but the one lure he said he depended on the most was a Profound Outdoors Azuma Shaker Z lipless crankbait.

“They just really ate it this week,” he said. “It’s got more of a subtle action and a good flutter to it. Out of all the lipless crankbaits I tried in practice, it was the one that got the most bites.”