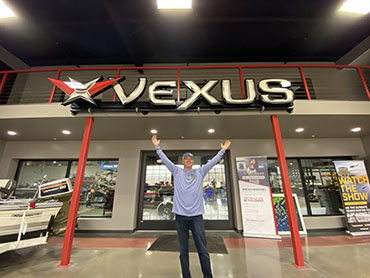 ‘’I’m thrilled to be a part of the Revolution and to start a long partnership with the Vexus family," he said. "I will be running the Vexus VX20 in the MLF Big5 (formerly FLW Pro Circuit) 2021 season. The entire Vexus lineup of boats are built with revolutionary innovation that the industry has never seen. From bow to stern, the attention to detail is second to none.’’

Said Vexus president Keith Daffron: “On behalf of our entire team at Vexus, we’re excited to have Chad Grigsby joining the Revolution. Chad’s experience, coupled with the years of friendship, combine as key ingredients for a great ambassador. We wish Chad the best of luck in 2021 and look forward to paying him some REV Rewards contingency cash."