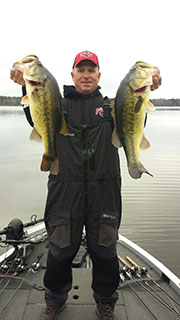 Rather Outdoors, the parent company of Strike King and Lew's, announced today in a press release that senior VP of sales Phil Marks died over the weekend following a long battle with cancer. He was 55.

A graduate of Texas A&M, Marks spent his professional life in the fishing industry. He served as head of Research and Development for many years at Strike King and was critical in collaborating with key pro anglers over the years to produce baits that claimed numerous titles at every level of tournament angling.

He was also an accomplished angler himself – he won the 2012 FLW Tour Open at Sam Rayburn Reservoir by more than 16 pounds over runner-up Keith Combs with a massive 32-12 bag on the final day. He also posted two BFL wins at Rayburn in early 2018.

"The best words I have to describe Phil is that he uniquely embodied everything that is right about the fishing industry and this lifestyle we’re all so passionate about," said Rather Outdoors CEO Ken Eubanks. "Phil was unique, genuine and authentic in everything he did, both within his profession and his life overall. He will be deeply missed and I consider him a truly irreplaceable part of our company, and my life, along with the many other lives he’s touched over the years."