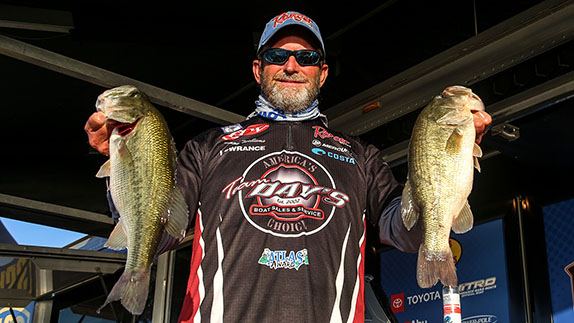 A change in fish behavior led Tommy Williams of Shepherdsville, Ky., to discover a secondary pattern that helped propel him into the at the Lewisville Lake Bassmaster Central Open in Texas with a two-day total of 34 pounds.

Thursday’s first round saw Williams catch a second-place limit of 18-08 and trail leader Brandon Dillard by 6-01. On Friday, Williams added another limit that went 15-08. He enters Championship Saturday with a 6-03 margin over Dillard.

Williams returned to the same windblown pocket he fished on day 1 and spent much of his time flipping shallow wood. The key to this area, he said, was the baitfish that had been blown into the shallows.

Confident that his area still held quality fish, Williams again flipped the cover with a Texas-rigged creature bait. Just like Thursday, precise casts and slow presentations were essential to getting bit. However, the action was considerably more sparing than he found on day 1.

“The fish kind of let me down today; it was a lot harder to get bites,” Williams said. “I had a lot of company and a lot of pressure on those fish. There are a couple of guys in the Top 12 that were fishing in there – we all found the same fish.

“They’re moving around a little bit and we’ve had to fish a little harder for them. Actually, my primary area let me down most of the day.”

Faced with a leaner outlook on his main pattern, Williams backed away from the shallow cover and explored nearby flats. There, he discovered he could get bites with a spinnerbait.

“I may have stumbled onto a little something for tomorrow,” he said. “As long as the wind doesn’t completely lay down, they’re going to eat the spinnerbait. That’s going to be the ticket for me.”

Carrying two potentially productive patterns into the final round gives him cause for optimism, but Williams said he’s unsure if his area will be able to produce a final competitive limit.

“The fish are either going away or they’ve all been caught,” he said. “It is a very small area that I’m fishing in and it has a lot of pressure.”

While solitude would have been preferable, Williams credited his fellow competitors for cooperative interactions.

“I have to hand it to the guys who’ve been in there with me,” he said. “We’ve all been courteous to one another. We have been gunnel to gunnel at times – literally – and we’ve all gotten along.”

Hailing from Grapevine, Texas, Dillard set the high mark on day 1 with a limit of 24-09. On Friday, Lewisville treated the local guide with far less generosity and he found only two keepers for 3-04. He’s in 2nd with a two-day total of 27-13.

“I ran a lot of the same stuff and I ran a lot of new stuff,” Dillard said. “I’m not really sure what changed. Like I said yesterday, Lewisville is feast or famine. One day you can go out and really wreck ’em and the next day it can be tough as nails. That’s what I experienced today.

“I was bouncing in and out, doing the same thing I did yesterday. I had some bites that just didn’t commit. Tomorrow’s a pre-front day, so maybe they’ll chomp. I’m just glad I get to fish the final day.”

Dillard fished a variety of shallow and deep habitats and caught one of his keepers on a spinnerbait and the other on a shaky-head.

“The wind died down and let me fish what I wanted to fish today,” Hollingshead said. “Yesterday I couldn’t fish my spots, so I scrambled and put together what I had. Today, I quit fishing by 9 o’clock.”

Anchoring his day-2 limit with a 6-09 largemouth, Hollingshead targeted deeper rock on ledges and a couple of isolated trees. Working in 12 to 16 feet, he fished slow presentations. Friday’s lighter wind allowed him to detect subtle bites.

“There’s a lot of bait in my area,” he said. “The fish are starting to move back and I’m getting them at the mouths of these transition areas.”

Here are the totals for the 12 anglers who advanced to the final day: