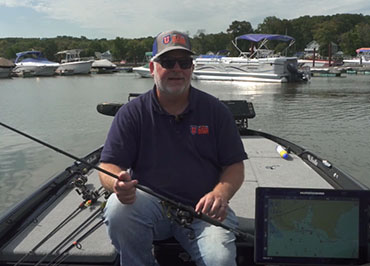 On the rivers near Pete Gluszek’s mid-Atlantic home base, there are lots of marinas and all of them hold bass at certain times. Since first going out on tour he’s realized that’s a pattern he can take on the road, from coast to coast, and find tournament-winning bass. Anyplace they exist, they’re often important habitat.

Certain marinas excel during the spring, especially those with ample protection. “It offers a very stable place for fish to spawn,” Gluszek said. “Marinas are outstanding places for bass to put their nests and raise their young.” They often offer a wide range of desirable cover, including pilings, sea walls and riprap. Early in the year he’s especially fond of the ones that have grass in them. All things otherwise being equal, he believes that a marina with vegetation will hold twice as many bass as one that has no greenery.

The marinas that are best in the spring are often comparatively barren once the spawn is well into the rearview mirror. Bass that have recovered from their reproductive rigors will move out into main lake or main river current, where the bait has gone. As it gets cold again in the fall, they’ll often move back, seeking the stability that comes with protection. If the bottom has been dredged out, that’s even better.

Gluszek’s lure choices vary seasonally and regionally, but he wants drop baits and coverage baits no matter what.

“One of my first weapons is one of the most consistent baits for a number of seasons, a jig,” he explained. Even when power fishing is on the menu, he’ll still employ finesse baits like a dropshot or a soft stickbait. They’re especially crucial when there’s been a lot of fishing pressure, the water is clear, or the bass are otherwise spooky. If there’s thick grass, he’ll also add a punching outfit.

He also loves to crank, and when he can deflect his crankbaits off of pilings or sling them around other cover he’s able to trigger hesitant biters. “A crankbait is a great tool to fish around launch ramps,” he added. Some of his favorites include a Storm Wiggle Wart (for 6- to 8-foot depths) and a Rapala Brat square-bill for water less than 4 feet deep. When fishing seawalls, he doesn’t want his lure near the wall – he wants it as close to the wall as possible. That means a parallel presentation is often best.

He also analyzes entry and exit routes to figure out where to start his attack. Oftentimes that will be at the beginning or end of a line of docks, or a stretch of riprap. He also likes transition zones, such as where a dock hits a marina wall. While he won’t ignore other areas, those are the high-percentage targets that earn the highest level of attention.

If you want to learn some of the other aspects of Gluszek's system for picking marinas – and then picking them apart – including the reasons he always fishes his crankbaits with a snap-swivel, check out his full video filmed on the water, available only by subscribing to The Bass University TV.