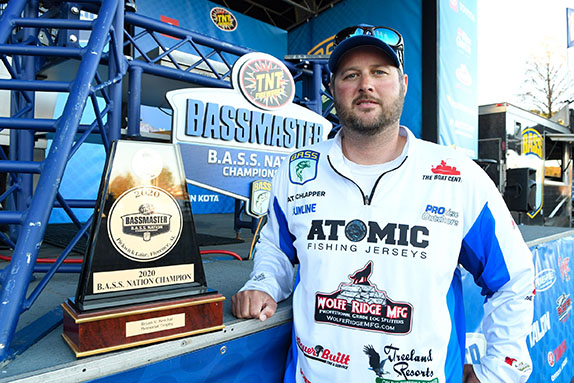 Pat Schlapper had nothing but good fortune on Friday the 13th when he caught the heaviest limit of the week for a come-from-behind win in the B.A.S.S. Nation Championship on Alabama's Pickwick Lake.

Schlapper, a 38-year-old resident of Eleva, Wis., caught five bass during the final round that weighed 23-03, which was 6 1/2 pounds heavier than any other limit weighed at McFarland Park this week. Combined with his limits of 14-11 on Wednesday and 13-12 on Thursday, Schlapper had a 51-10 total and won the championship by more than 7 pounds.

Schlapper’s win brought a wealth of riches, including a $20,000 cash prize, an invitation to compete on the 2021 Bassmaster Elite Series and $16,000 in paid entry fees to those tournaments. B.A.S.S. also will loan Schlapper a bass boat, complete with a “Nation's Best” wrap, to use in Elite Series events.

But without a doubt, Schlapper’s most precious prize is a berth in the 2021 Bassmaster Classic. The most prestigious fishing tournament in the world will be held on Lake Ray Roberts in Texas March 19-21.

Schlapper was in 6th place after day 1 and jumped to 2nd on Day 2, trailing Louisiana’s Blake Sylvester, who led after each of the first 2 days. He trailed Sylvester by only 6 ounces heading into the final day but wasted no time pulling ahead – and away – from the 11 other anglers who made the cut and fished Friday.

“I got lucky,” he told a B.A.S.S. official after the final weigh-in, debunking the lore that only bad omens come on Friday the 13th.

The good luck struck Schlapper early on Friday when current was moving quickly on the Tennessee River. Schlapper was having a difficult time staying in place on a spot he wanted to fish about 5 minutes from McFarland Park, so he motored above the spot and began drifting back to it. He caught an undersized bass on the drift, which prompted him to cast a few more times to the same area.

The key was putting a 3/4-ounce jighead on the paddletail swimbait (shad color) he’d used throughout the tournament. The switch got his lure to the river bottom and it ignited a smallmouth feeding frenzy. By 10 a.m., Schlapper had 21 pounds and made his final upgrade (a 2-pound bump) at midafternoon.

He considered heading back to shore at noon to weigh his haul, but he stuck it out until 45 minutes before the 2 p.m. weigh-in.

“I put all my eggs in the basket with the smallmouth,” he said. “The current here is a lot like what I fish back home on the Mississippi River.”

Schlapper’s heaviest smallmouth weighed 5-03 and his smallest was just shy of 4 pounds.

“I caught a lot of good fish on a 1/2-ounce jig this week, but the 3/4-ounce made the bait swim right,” he said. “It was like the smallmouths had never seen it before.”

Sylvester, a 29-year-old angler from Plaquemine, La., finished second with 43-02, including 14-05 on Friday, to earn the second of three Classic bids up for grabs. He also won $15,000 for the runner-up finish, as well as entry into the 2021 Bassmaster Opens.

Sylvester pounded a grassy stretch of the river all 3 days, using a Delta Lures Thunder Jig, a Humdinger bladed jig and a Missile Baits Shockwave (green-pumpkin).

“I just wanted to make the third day and give myself a shot (at the Classic),” Sylvester said. “It worked out.”

Justin Kerr of Lake Havasu, Ariz., finished third with 40-07 and secured his own spot in the Classic. He won $10,000 and invitations to all of next year’s Opens.

Kerr, 39, rotated between a Bill Lewis Rat-L-Trap and an Evergreen Stealth Blade to catch his biggest bass on Pickwick. After 20 years of professional fishing, he was elated to finally qualify for the Classic.

“It’s been a major goal of mine for as long as I can remember,” he said. “After all this time, I’ve got it.”

In all, 94 anglers qualified for the tournament, including 48 in the boater division and 46 in the co-angler field, all competing for a share of $176,800 in cash and prizes. All but four states were represented, with only Alaska, Connecticut, Hawaii and North Dakota not competing.

Here are the final totals for the Top 12: