Robertson leads after day 2 at Cherokee 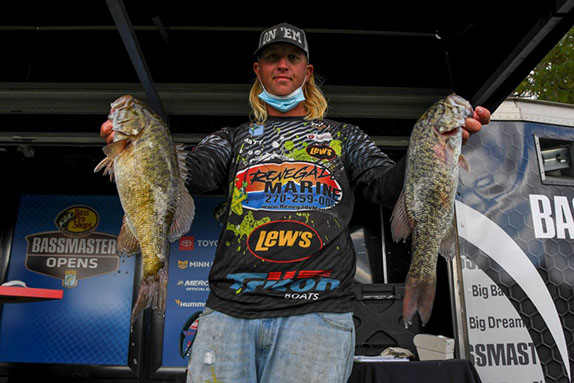 Holding his ground and waiting for his opportunities, Matthew Robertson of Kuttawa, Ky., took the day-2 lead at the Cherokee Lake Bassmaster Eastern Open with a 2-day total of 28-08.

After sharing a 2nd-place day-1 tie with Denny Fiedler of Wabasha, Minn., and trailing the first-round lead by 4 ounces, Robertson heads into the final round 3 ounces ahead of Fiedler. Turning in the event’s most consistent performance, Robertson added 14 pounds to the 14-08 he caught on day 1.

“I’m fishing basically one spot,” Robertson said. “I didn’t know it had the ability to do this. I caught one keeper there during practice on Wednesday and rolled in there yesterday thinking I might try to catch a keeper and – bam! I don’t know what to say.”

Fishing in 20 feet of water, Robertson said his bite is not fast and furious. Rather, he’s having to pick his way to a daily limit.

“It’s slow, I’ll get a bite here and there,” he said. “I’m going to go back there and wing it again tomorrow. I guess I’ll sit there all day because I don’t have anything else.”

Robertson said his spot has several boulders, but the key element is baitfish. Schools of shad are moving in and out of his area and smallmouth bass are aggressively targeting the forage.

“I’ll watch them on my Garmin LiveScope and see a school of smallies bust up through the bait,” he said. “They’re also hanging around some of those big rocks.”

While a swimbait produced during practice, Robertson said the fish are not committing to his reaction bait – they’re only following and bumping it. Instead, he’s catching his bass on the same dragging technique that produced on day 1, along with another presentation that he dialed in Friday.

“I had a little something pop into my head, so I rigged it up and first cast I caught one of those good smallies,” Robertson said. “So now I have two things to go at them with.”

Noting that he is focusing on a tight area, Robertson said he’s not moving his boat more than 60 feet.

“I’ve noticed on this lake the fish are really roamers. I think different schools are running around and one will come through and I’ll catch one or two. Hopefully, some more will swim through tomorrow.”

Fiedler said he returned to the same scenario he fished on day 1 and bolstered his first-round weight of 14-08 with another limit that weighed 13-13 for a two-day total of 28-05. He’s fishing the lake’s upper end and throwing moving baits in stained water.

“It started out much quicker today,” Fiedler said. “I caught three fish within the first 30 minutes, so I was happy about that. That settles you down.

“It took a while to get number four, then I went to my secondary spot. I filled out my limit and culled three times.”

“I executed a little better today; I didn’t lose any fish,” Roark said. “I lost a couple of good ones yesterday.”

Filling his day-2 limit with smallmouth, Roark said he caught his fish on a mix of moving baits and reaction baits. Instead of a specific pattern, he covered a variety of spots from 2 to 40 feet.

Here are the totals for the 12 anglers who advanced to the final day: