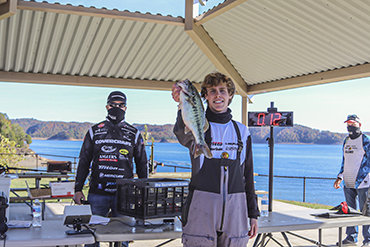 The winners weighed a bag of five fish (two largemouth and three spotted bass) totaling 9.98 pounds, which included the big fish of the event, a 4.97-pound largemouth. The runners-up weighed in 9.85.

The winning team of Baker and Morris, captained by Campbellsville University bass team member Wyatt Pearman, also displayed outstanding sportsmanship. John Harris of Danville, Ky., was fishing in a local tournament and experienced mechanical troubles. Pearman, Baker and Morris towed Harris’ boat back to the ramp where his event had launched after the day had already been shortened by a fog delay that morning.

“It was a blessing to see three young men show such unselfish, Christian attitudes,” said Morris. “To be willing to give up 30 to 45 minutes of their tournament day was just outstanding. They had a long run back to the check-in, too.”

“This event will be memorable for many reasons; the turnout in a weird year, the quality of anglers in Kentucky high school fishing, and the opportunity to go to Cedar Creek for Sunday (where the Top 5 teams competed for the title)," said Roy, a Major League Fishing competitor. "The one aspect that stands out the most for me this year is the college scholarships.

"Winning these college scholarships is a life-changing event for these anglers. The investment these schools and sponsors made in providing scholarships for these top teams is a big deal. I am so excited to look back in a few years and see how it helped these student anglers."

To see a video of the event, click below.