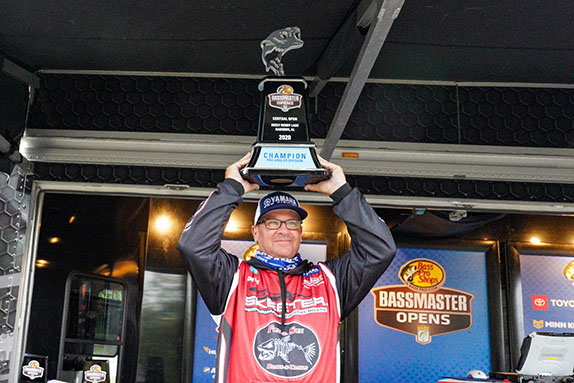 ōI have two 2nds, a 3rd, a 4th, two 5ths, a 6th and three 7ths ¢ it feels good to finally win one,ö Bird said. ōIÆm just not a closer. This time, when I got up there, I made up my mind that they were going to have to take it from me.

ōIt took me a while, but it was worth it. I earned this one, for sure.ö

Fishing fast to cover lots of water, Bird said he covered a 15-mile stretch up the Coosa River. Throughout the event, he reported making upwards of 100 stops a day ¢ often visiting key spots multiple times ¢ and making approximately 1,000 casts a day.

Bird formulated his fast-paced strategy for the tough fall transitional period that found Neely Henry in a stingy mood. Bites were scarce, but Bird quickly dialed in the types of spots he needed to fish.

ōI had a terrible first day of practice, so I decided to run up the river and check it out,ö he said. ō(Alabama Power) was running water wide open and the fish were really biting, so I figured that I was going to stay in that area.

ōI knew the fish wouldnÆt bite as good when they werenÆt running water, so I ran tons of little drains that had water running out.ö

ōI had a couple little stretches where I could line up with where the current came down,ö he said. ōThe end of a dock is always good and you could get in behind them and find a few fish.

ōI also caught several goods ones off stumps. I didnÆt ever catch many off laydowns, but they were on stumps.ö

Catching a mix of largemouth and spotted bass, Bird did most of his work with Lucky Craft RC 1.5 square-bills. He had each bait custom-painted in bright chartreuse patterns, but presentation was the most important element.

ōThe whole key to it was burning that bait,ö he said. ōThe water was a little clear for a square-bill, so you had to trick them. I donÆt know how many spots hit my bait at the boat and didnÆt take it.ö

Targeting wood, riprap, chunk rock and gravel banks, Browning caught his fish on a Z-Man JackHammer ChatterBait with a Z-Man Razor ShadZ trailer and a Jewel finesse jig with a craw worm.

ōIt was just typical river fishing; you just fish whatÆs in front of you,ö Browning said. ōRealistically, I had (approximately) the same bag three days in a row, I just had that big fish on Friday that bumped me up really good.ö

Here are the final totals for the Top 12: