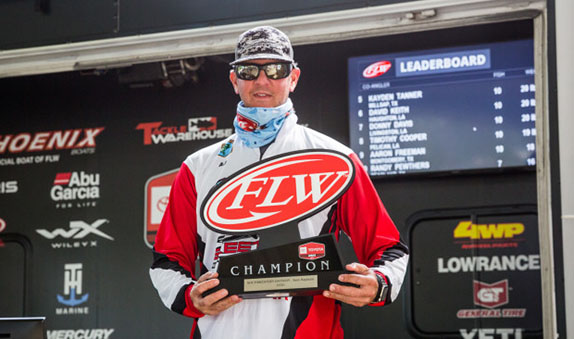 Aaron Johnson caguht an 18-14 stringer on Saturday to win the Sam Rayburn Reservoir Southwestern Toyota Series with a 3-day total of 54-14. It was the second FLW triumph for Johnson, who earned $31,751.

Johnson trailed Blake Schroeder by 3 ounces heading into the final day and both boxed more than 18 pounds, but Johnson's haul gave him the victory by 11 ounces. His key offering was a modified crankbait with a custom paint job and a filed-down bill.

“I have a lot of confidence in it,” Johnson said of his bait. “I won a two-day tournament a few years ago here with it. I know what it will do if you stay with it, so I never put it down. I threw a ChatterBait maybe 10 times and then I cut it off and put on a crankbait. I just had to stick with it and let It work itself out.”