Cook wins Toyota Series at Lake of the Ozarks 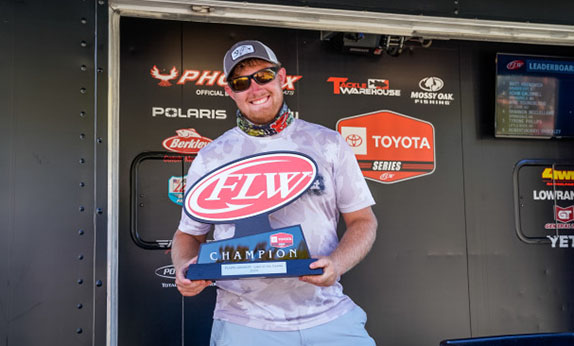 Corey Cook of Lebanon, Mo. caught an 11-pound stringer on Saturday to win the Plains Division Toyota Series event at Lake of the Ozarks with a 3-day total of 49-13. He prevailed by almost 3 pounds over FLW Pro Circuit competitor Jeremy Lawyer to pocket $33,619.

“This is crazy,” said Cook, who earned his first career FLW victory. “Last year we won that boat, and that was the biggest thing. And I’ll never forget that because it was with my dad. It’s super special. But to get this, man, this is super-awesome. It’s what I always dreamed of.”

However, Cook said that dream was nearly a nightmare to start the day.

The moment they announced his name at takeoff, Cook’s motor stopped working as he went to pull away from the dock. Fortunately, he was able to swap into another boat, but his luck really never turned around much, from only catching three keepers by mid-day, to a lost big fish, to even making a few-mile run to hit one dock, only to have two guys stomp across it while he was fishing it.

Basically, Cook said, if it could go wrong for him, it did. Fortunately, he had a goal and stuck to it.

“There was definitely a moment or two this morning where I thought, ‘Man, it’s just not my day,’” said Cook. “But I tried to keep my mind positive. I knew I just needed five good keeper bites because it’s usually tougher on Saturday.”

Cook ended the day hooking seven and landed six keepers, which was more than enough.

Cook said he spent most of the year sinking brush piles around docks for this event in the Grand Glaize area and marking them, though only by memory. Some spots were in out-of-the-way places, according to Cook, but only one in five was any good, with less than 20 producing fish for him in this event. Cook also said he only used two rods with a small tackle box full of homemade green-pumpkin football jigs with matching Zoom Super Speed Craw trailers.

“That’s just what we do,” said Cook, who counted on his memory and simple tackle options when he quickly switched boats Saturday morning. “It keeps it simple. You’re not switching back and forth between a hundred things throughout the day. We have two colors: green and brown, but brown wasn’t as good this week; however, if you put it in front of the right fish, he’s going to bite it.”

Cook said he found just enough “right ones” to seal the win.

“Words can’t describe how this feels,” he said.