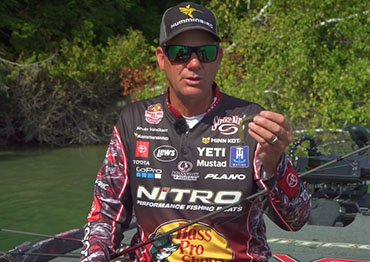 Kevin VanDam knows that there are times when super-light baits and slow presentations excel, but he’s a power-fisherman at heart and oftentimes he can trigger those same fish with increased speed. He’s developed a system that allows him to mix the best of both of those worlds, and takes several classic finesse baits and adapts them to his needs.

One is a standard Strike King Coffee Tube. “You can fish a tube a million ways and none of them are wrong,” he explained, but one of his favorites is “snapping” it. He’ll cast one out on a heavy head and let it fall on a slack line. If a bass doesn’t hit it on the descent, he’ll get to work, snapping it four or five times in quick succession, to the point that he’s “almost jerkbaiting it.” In clean-water areas where many anglers would utilize a Carolina rig, a wobble-head or a football jig to cover water, this is his go-to. That’s not just up north, but also in the South and Midwest on lakes like Table Rock, Bull Shoals, Kentucky Lake, even Guntersville.

“They just can’t help it,” he explained. “It’s just a really fast scoot of that tube going by.”

He mixes up the number and length of the snaps on any single cast to dial in the fish on a particular day. “It’s all about having short little bursts and that quick darting action of that tube.”

Another one of his favorite power finesse lures is a small swimbait, like a Strike King Rage Swimmer. He said that in the heavier sizes it can be tough to find one with a small enough hook for the little versions, but matching the right terminal tackle to the bait is critical. Sometimes he’ll fish it on the bottom like a tube, but it also excels for suspended bass on southern reservoirs. He’s used it effectively on Table Rock, Lake Martin and Hartwell, among others. “When fish get deep and they get on bait, you want to have something that imitates that baitfish,” he said. He lets it fall on a semi-slack line before starting his retrieve, which he typically keeps somewhat erratic. “Almost nothing that I fish I reel in with a straight, steady retrieve, so why would you fish a swimbait that way?”

When fishing these lures off the bank, he believes that longer rods provide a distinct advantage and he usually employs a spinning rod with a super extra-fast tip in the 7’4” to 7’6” range. He occasionally uses a braid to fluorocarbon line combination because it eliminates line twist, but he probably uses straight fluoro more than many of his peers. He likes it best with the swimbait because it keeps the lure down in the water column. If you use braid-to-fluoro with the tube, he recommends a rod with a slightly softer tip. Because he fishes so much clear water, he uses a comparatively long leader and attaches it with the FG knot, which typically lasts all day, doesn’t fail and casts better than its competition.

If you want to learn some of the other aspects of KVD’s highly-effective power finesse system, including how he packs a Plano Edge box to cover all of his bases, check out his full video filmed on the water, available only by subscribing to The Bass University TV.