Ever heard of a Weed Wing? 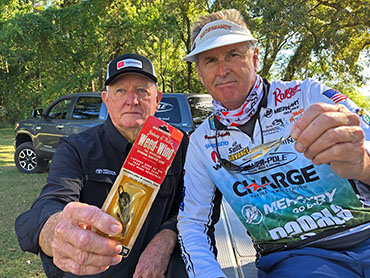 On a perfect autumn afternoon, there stood 79-year-old Tommy Swindle on the Goose Pond Landing boat dock waiting on his son Gerald to come for the day-1 weigh-in at the Bassmaster Elite Series event at Lake Guntersville.

Many may not know it, but the father of bass fishing’s funniest man and two-time Bassmaster Angler of the Year has a long and impressive history as a tournament bass angler. Tommy Swindle was among the original band of anglers who signed up to fish with Ray Scott’s new Bassmaster Tournament Trail back in the late 1960s.

“I had just enough money to enter three B.A.S.S. tournaments per year back then and still feed my family,” recalls the comical former building contractor.

Mr. Swindle’s bass fishing résumé garners great respect. Not only was he one of Ray Scott’s original Bassmasters, he also qualified for the 1978 Red Man All-American and five top regional trail championships, and he won three boats as a co-angler in the early days of the Bassmaster Elite Series a dozen years ago.

Not to mention the day on Guntersville when he brought a 5-bass limit to the scales that weighed 39 pounds, only to finish 2nd.

When asked what his two favorite lures have been across 60 years of bass fishing, he pointed to a finesse worm and one that most modern-day bass anglers have never heard of – a Johnny O’Neil Weed Wing.

I’d wager one of my treasured vintage Storm Wiggle Warts that 95 percent of the current 85 Elite Series pros have never heard of a Weed Wing. But I also knew that one that just might have. Florida’s Bernie Schultz, a Bassmaster pro of 32 seasons who has a passion for lure-collecting and the history of the sport.

With an ounce of coincidental good fortune, there was Bernie within a shout of where Tommy Swindle and I stood.

Ready for this? Not only had Bernie heard of a Weed Wing – he actually had a handful of them in his Ranger – some of which were still in the old yellowed packaging.

Always a class act, Schultz was eager to sit under a shade tree and share his historical knowledge of the lure.

“It’s basically a weedless spoon with a tiny propeller on the nose of it that makes a super-unique buzzing sound, and the little propeller wings help keep the weeds off it, too,” explained Schultz, who landed in the middle of the leaderboard Wednesday on Guntersville.

Schultz fondly remembers the day he caught a 9-pounder on a Weed Wing while practicing for a B.A.S.S. event on Okeechobee with former pro Jim Bitter, and for Tommy Swindle, the magical little surface spoon was an absolute staple on lakes like Ross Barnett and Guntersville.

The yellow packaging had price stickers indicating Schultz paid $3.95 for them at The Tackle Box in his hometown of Gainesville, Fla., but he says he wouldn’t take 50 bucks a piece for the no-longer-made Weed Wings he prefers to dress with a double-tail grub and a trailer hook.

“I’m like Tommy – I believe in them. Lures get hot and trendy for a while, and then for various reasons they stop being made and disappear. But it’s not because they don’t catch fish,” said Schultz.

The unplanned shade-tree lesson in bass fishing history with two guys I admire meant the world to me. Tommy Swindle told me he returned home following his chat about Weed Wings with Bernie and myself and told his wife, “I wouldn’t take no amount of money in the world for the time I had today.”

Me neither, Tommy. Like an old Weed Wing, some things in this life are simply priceless.