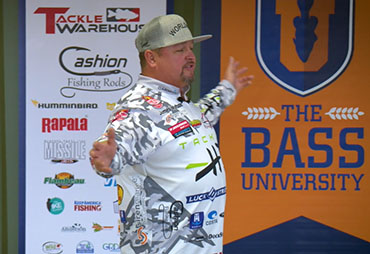 There’s not much aquatic vegetation near Ozarks-region pro James Watson’s house, so when he went out on tour he had to quickly improve his grass game. That’s led him to develop a system and a set of reliable tools that he employs everywhere, but the first step is finding a hard bottom.

“I know one thing for a fact,” he said. “When you’re in a grass situation, I like to have something where you can scrape the bottom and feel on the outside of the grass. You want to find the hardest bottom you can possibly find around the grass.” When fishing vegetation he focuses on windblown areas, only avoiding them if the wind is so ferocious that the waves are pounding the vegetation. He’ll also look for the clearest water he can find. “I don’t like muddy water on grass lakes.”

He loves to punch creature baits, using a 7’11” flipping stick and 50- to 85-pound braid. When that’s his preferred strategy, he’s focused on irregularities. In Florida, for example, “I like to look for long stretches of bank that have an occasional little cut with hyacinths in them.”

Around pads, he often flips a Senko, but he won’t rig it with a big hunk of tungsten. “Don’t use a super-aggressive weight when flipping lily pads,” he explained, noting that a 3/16-ounce model is one of his most frequent choices.

Another favorite lure is the Zoom Magnum Speed Worm in junebug, redbug or watermelon red. He rigs it with a pegged 1/8- or 3/16-ounce Swagger Tungsten weight on 20- or 25-pound fluorocarbon. Many anglers fish it on braid, but he said that his quick reaction time makes that a hazard.

“I will swim it around clumps of grass just like you would a swim jig,” he explained. He does make one key modification, however – he cuts off the tail and attaches a small willow blade with a screw-in spring. Other choices for covering water include a Reaction Innovations Skinny Dipper or a Gambler Lures Big EZ, both of which operate like weedless wake baits.

If you want to learn some of the other secrets of how an Ozarks hammer found a home in grass lakes around the country, including why almost all of his grass rods are 7’6” or longer, check out his full video, available only by subscribing to The Bass University TV.