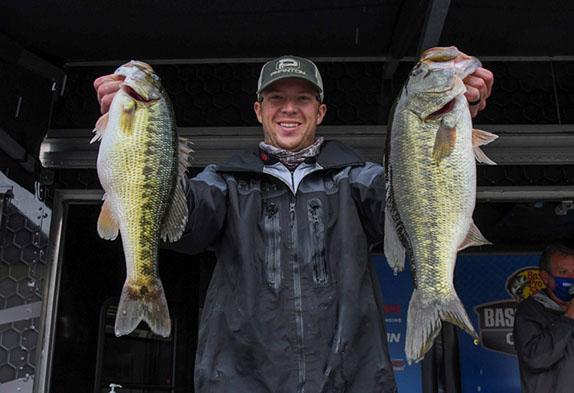 Knowing which changes to make and when moved Patrick Walters into the day-2 lead at the Lake Hartwell Bassmaster Eastern Open with a 2-day total of 30-10.

Turning in one of the most consistent performances so far, the Bassmaster Elite Series pro from Summerville, S.C., added 15-11 Thursday to his day-1 catch of 14-15. Doing so required several key decisions.

“I had to change it up a good bit today; I had to change the bait, the presentation and color,” Walters said. “My technique was a lot different today.”

Walters lamented a similar frustration echoed by several of his fellow competitors – bass that would rarely commit to a bait. On blueback herring lakes like Hartwell, bass tend to prefer sunnier conditions that allow them to better spot the baitfish silhouettes.

Thursday saw even more clouds than day 1. Also, the lack of significant wind typically makes bass more skittish, so today’s cloudy, mostly calm conditions presented a tough bite. The upside is that the process of elimination helped Walters dial in an effective program.

“If I would have caught what I saw today, I think I could have caught 20 pounds,” Walters said. “I had the bites, they were just nipping at it. They were being weird today, but I have a good idea about tomorrow.

“I could honestly tell by the way the fish were reacting that they weren’t feeding well. I could call them, but they wouldn’t eat the normal presentations, so I changed it until they started eating it. I was fishing behind people and when they’d leave, I could pull in there and catch a couple. I was that confident in my bait selection.”

Walters withheld specific details but said he caught all of his bass Thursday on topwater lures. Targeting a mix of cane piles and other structure in 10 to 20 feet of water, Walters said he made his final upgrades late in the day.

Walters said burning the time to return to the dam was a matter of necessity and confidence.

“The fish weren’t biting, so I had to make a change,” he said. “They’re always biting somewhere, you just have to go find them. It was just instinct; just going with your gut.”

“It was the same program as yesterday, there’s still a lot of boats fishing for those schooling fish and it’s just a timing deal,” Wicker said. “There were bite windows, but overall the afternoon was better.

“There was a period when I caught two or three pretty quick this morning, but I sat on those fish until probably 1 o’clock until I caught any more. The wind picked up the last couple of hours, and I think that probably helped things.”

Wicker caught his fish on a rotation of a Berkley Cane Walker topwater bait, a weightless Zoom Fluke and a 3.8 Keitech swimbait on a 1/4-ounce jighead.

“I did not have but three fish at 12:45,” Maner said. “I was throwing topwater, and I had a lot of fish come up and just roll on the bait. I thought if I just keep putting myself in those areas, sooner or later I’ll (fill my limit).

“With about 30 minutes to go, we came back upriver and I caught my fourth and fifth fish. That was cutting it to the wire.”

Maner caught most of his bass on a big topwater lure, but his biggest fish – a 4-15 largemouth – ate a 3/4-ounce football jig with a Strike King Rage Craw trailer in 40 feet of water.

Here are the totals for the anglers who'll compete on the final day: